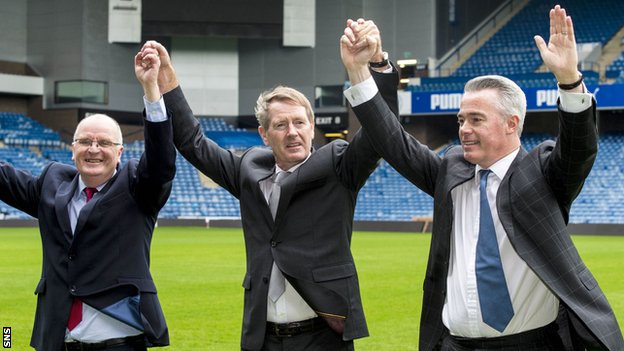 With eleven players already gone
from Ibrox, albeit still not officially confirmed by the Rangers board, plus
the Newcastle Five (presently) back at St James’ Park, equally unconfirmed by
Rangers chiefs, nevertheless the likes of Cammy Bell, Nicky Clark, Nicky Law
and David Templeton remain at Ibrox, albeit it is unknown how long for.
With a clutch of English
Championship sides still in the hunt for Law, and rumours (denied) that
Templeton has been invited to leave, it is abundantly clear that on top of the further
rumours and counter-rumours about the management position, Rangers are in a
serious state of flux.
Only…flux suggests things are
actually happening, when truthfully, while there have apparently been moves to
instigate things, nothing has materialised yet.
Meanwhile Hibernian have stolen a
march by signing Queen of the South’s Danny Carmichael, and Celtic threaten to
snatch Scott Allan.
In short, not enough appears to
be taking place. In fact, absolutely nothing appears to be taking place.
The only thing we know for
certain is Mark Warburton has indeed spoken to (someone on) the board – but it
probably was not either Paul Murray (who is apparently in the USA) or Dave King (currently in South Africa).
Beyond this, beyond pure speculation
in the press regarding alleged talks with Portuguese coach Vitor Pereira which supposedly broke down last month, or today’s Mark Wotte DoF story, Rangers fans simply are not seeing enough tangible
action to repair the ‘broken’ Club (as described by Murray more times than I
care to remember).
Even lowly Dumbarton have not
only found a new manager, but have signed two players already, while Rangers’
board spends its time producing press releases on EGM voting requests.
Unfortunately, all this boils
down to money; supporters, even including the majority who backed King et al,
are seeing almost three months of no new funding, beyond one £1.5M loan from
King, and they are getting just a tad restless about it.
The man who preached on March 6th
that he would inject £10M (saying nothing about it being a loan) and hoped the
other £10-15M would be contributed by Gilligan, Murray, Park et al.
Did we really expect it to take more
than three months for these guys to actually put their hands in their pockets?
Truth is, next-to-nothing to fix
this mess is being done, and if it is, it is being carried at a snail’s pace.
Gentlemen of the board; pick up
the speed, or next season is a bust before it even begins.