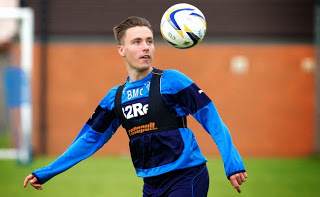 When he burst onto the scene as
an enthusiastic 18-year old in Brechin, Barrie McKay looked like a complete
natural and worthy of building the Club round following the squad exodus in
preceding months.
Indeed, the winger managed to
sustain a place for the first couple of months before then-manager Ally McCoist
inexplicably froze him out and essentially finished the youngster at Ibrox
under his tenure.
Various loans to Morton and Raith
followed, and while he returned briefly under McDowall to Murray Park
following the first loan, McKay found himself back off to Stark’s Park late
last year.
He is back now, returning
following the end of Raith’s season prior to the Championship playoffs, and
while the attacker played no part in those matches, surely it is time he
finally began to play a role at Ibrox.
When he emerged in 2012, his
maturity, pace, control, vision and skill were well beyond his years. He looked
like a natural, and was the one thing that stood out in that stodgy Ramsden’s
Cup win at ‘The Hedge’.
It is unknown why he was frozen
out, but McCoist’s record with youth was a catastrophe and that may be
self-explanatory.
McKay, back in Govan now, has a
lot to offer, and could get a second chance potentially under a real manager (whoever
is appointed) who can see and recognise talent and give the young man a break.
Rangers need talent, and this lad
has it.
Barrie McKay would be like a new
and free signing.