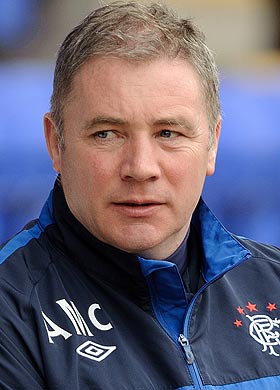 Nothing was laid bare more
explicitly last night than the feeble nature of Rangers’ present squad. The way
an absolutely dross Motherwell side tore Rangers’ defence apart and secure
three goals exposed the embarrassing and frankly pathetic truth of what this
Rangers squad is.
And for that we can squarely and
firmly thank the greedy incompetence of Ally McCoist, who has now surely
stained his once-glorious legacy entirely.
It is true that present manager
Stuart McCall’s tactics last night were wrong – the formation did not click, as
it did not against Hibs, despite the two goals, and as it did not against Queens, despite, again, Rangers nicking an equaliser. The
end results in both ties papered over the cracks of the squad, of which there
are many.
McCall deserves a great deal of
credit for giving Rangers something of a shout going into these playoffs, and
for getting them as far as the final. He has certainly added energy, and a bit
of passion into the team – but tactically, while some of his tinkering has
borne fruit (Hibs away, Queens away) he
probably is not the answer for Rangers long-term.
But this gets away from the cause
of Rangers’ problems on the pitch; Alistair Murdoch McCoist. The ‘manager’ who
abandoned promising young players like McKay, McAusland, Gallagher, Gasparotto,
et al and who completely ruined Aird, while signing such complete rubbish as
Templeton, Kyle, Cribari, and Argyriou to name just four, and slowly built a
frankly horrible team.
McCoist said Rangers would not
have won the third division then League 1 ‘with youth’. Curious then how Hearts’
sprightly young team, cobbled together by a rookie manager managed to coast the
infinitely-tougher Championship at the first time of asking.
McCoist knew a fairly short spell
into his career as Rangers boss that he was not cut out for it, but his ego,
monstrosity that it is, refused to allow him to resign.
Instead he blundered on, with
that equally monstrous £850,000 wage and continued to produce a travesty of a ‘team’
– a useless sham of a squad with the softest centre any Rangers team has ever
had.
Charles Green is not popular, and
even I had enough of him by the end in truth, but he was absolutely spot on to criticise
McCoist and describe his Rangers team as the worst ever. But this warning was
not heeded, and rather than anything being done about it, McCoist continued on
and left Rangers like this.
McCall has done something of a
miracle job to get Rangers vaguely in contention, but the truth of Rangers’
hopelessness, as left by McCoist, was completely on show last night for
everyone to see.
You can all whine all you like
about ‘the spivs’ to blame, and ‘Mike Ashley’ this etc, but when it came to
signing players and producing a team – that was McCoist’s jurisdiction, no one
else.
And when a ghastly Motherwell
swept three past them it became evident just how much damage Ally McCoist
actually did to Rangers.
And how utterly despicable it is
to watch him continue to siphon £850,000 a year for doing nothing.
The Super Ally I remember
disappeared when he went into his garden.