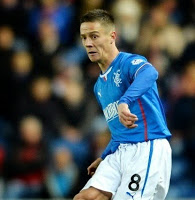 When Queen of the South came to
Ibrox yesterday, the home team put out by McCall continued an increasing trend
the new manager has been setting, whether deliberately for his own tactical
reasons, or encouraged by the board.
That is, since McCall took
charge, virtually none of the 13 out of contract players have frequently played.
Whether a deliberate tactic to
hasten their departures as desired by the board trying to cut the wage bill, or
McCall’s judgement that they simply are not good enough, their departures from
the first team has been as dramatic as it has welcome.
For the visit of the Doonhamers,
the side selected was;
Bell,
Foster, McGregor, Zaliukas, Wallace, Murdoch, Shiels, Law, Vuckic, Clark, Miller.
Only one of these players sees
their deal end this summer, and that is the recently-returned Foster, who is a
forced choice at right back with the alternative also being out of contract
this summer, and currently injured; Sebastien Faure.
Otherwise there appears a quite
systematic elimination of all the ‘out of contracters’ from the first team; Ian
Black, Lee McCulloch (recently), Steve Simonsen, Steven Smith, Kyle Hutton,
Kris Boyd, Bilel Mohsni, Lee Robinson and Jon Daly have found their
opportunities reduced to next-to-zero with McCall’s selections all being
players who have medium to long-term futures at the Club.
Black, Hutton, McCulloch, Mohsni
and Boyd to name just five were regular to guaranteed starters under McCoist.
As this entry revealed, the wage
bill is set to be sheared dramatically this summer with the impending exodus,
and it seems the Club is preparing for that by phasing out all aforementioned
players where it can to prepare Rangers for life with the rest of the squad,
and new additions.
Either that or McCall has woken
up to how bad most of those players actually are.