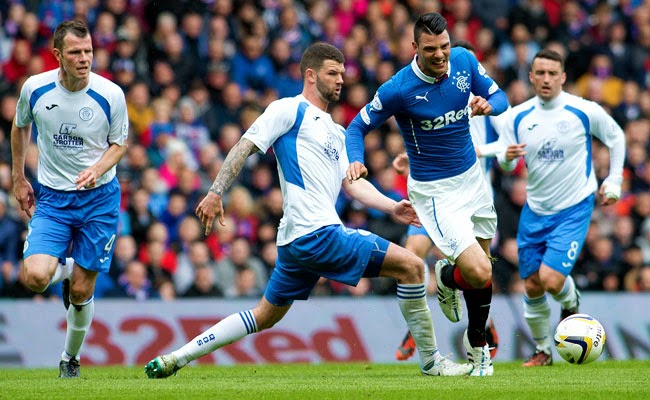 Rangers’ Slovenian forward Haris
Vuckic was one of the heroes for the Ibrox side, and he was absolutely
delighted the side progressed;
“We are pleased we came through. We are now
focused on the Hibs (match) – we’ll get in a recovery and be ready for Wednesday.”
He urged a note of caution about
how much ‘energy’ Rangers players wasted in fighting so hard for the draw;
“First half, three or four good chances, if
we take them, it is easier to play then you can sort of relax a little as well and
you don’t waste so much energy. But if you don’t score there’s always a good
chance you’re going to concede. We did that.”
But he was equally pleased at how
they endured and fought together.
“We showed great spirit and great togetherness
straight in the second half, and he went and he (manager Stuart McCall) said ‘you
have to score’ and we did it through Lee Wallace and it was a great goal.”
This was also Vuckic’s first
appearance at a packed Ibrox and he was almost overawed by the crowd;
“Ibrox was amazing and when we came out I
had a look around and to see so many people that’s real; that’s real Ibrox and
hopefully again on Wednesday a full house when it’s always easier to play and
get the crowd behind you.”
On his amazing goal line
clearance;
“I’m very pleased that I’ve been on the
right place at the right time, sometimes you have to defend and not just attack
but like I said I’m pleased that we came through.”
He poked a little fun at Bell’s height regarding
that clearance;
“I just saw that Cammy Bell was going to be too short when the
striker shot on goal but I’m just happy that I was there and cleared the ball.”
On preparation for Wednesday’s
clash with Hibs;
“It’s going to be harder for us (to prepare
for Wednesday), we wasted a lot of energy but now it’s all about the right
foods, the right drinks, to get recovered as quick as possible and get ready
for the game.”
But he saw a positive side to
Hibs having a break and Rangers being up to match speed with so many games
recently;
“Hibs’ break is an advantage for them, but
as well we can put it positively in that we had two games and our fitness is
better, our match fitness.”
One can only hope Rangers can
hold onto the Newcastle
loanee.