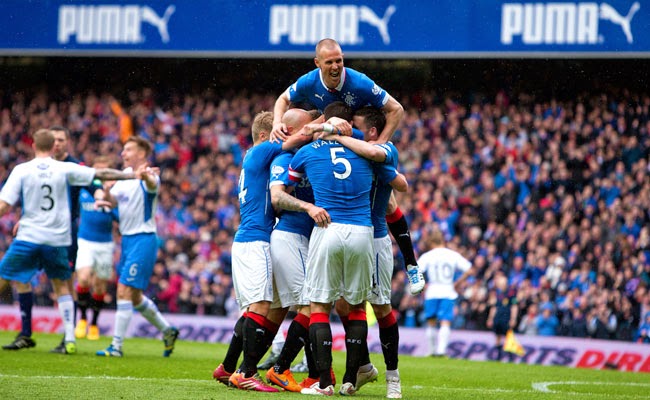 With a mooted ~51,000 (it was
just over 48,000 in the end) sell-out crowd at Ibrox for the second leg v
Queens, hopes were high Rangers could see the tie through having already broken
the hoodoo of winning at Palmerston Park the previous weekend.
The team selection was about as
good as Rangers have, with a 4-4-2 in front of Bell comprising a back four of
Foster, McGregor, Zaliukas and captain Lee Wallace, with Murdoch and Shiels
sitting in front while Law and Vuckic flanked the wings, and Clark partnered
Kenny Miller up top.
It is hard to think of any better
players Rangers actually have in their squad – nitpicking we could swap Foster
for Sinnamon or Faure, but beyond this the selection was about as good as Rangers
have. There is some call for Callum Gallagher, but this is really splitting
hairs.
And after a slightly patchy first
10 minutes Rangers hit their stride, with, if not gloriously flowing football,
then certainly dangerous and dominant.
Unfortunately this leg
highlighted many of the fragilities Rangers have, and Queens
exposed them rather well, as did the occasion.
The big one was composure; Kenny
Miller, Nicky Law, and the increasingly awful Nicky Clark flubbed their lines
badly in this match, showing absolutely no conviction when given a fine chance
in the box. Clark especially was a serial offender, and while full of beans, running,
and a total nuisance to opposing defenders, he looks ever more like a League
One-quality striker and a mile off Championship material, never mind
Premiership. His inability to control the ball under pressure, and his hurried
and loose finishing was exposed cruelly in this match, and it is only
astounding that he lasted 85 minutes.
And that composure can be equated
to the rest of the team; nerves and a lack of cutting edge throughout the team
made the entire display very powderpuff. While the home side dominated the
match, use of the ball was often poor, rushed, and had no direction.
Attack was especially painful to
watch the further the game grew, as ponderous passing across the opposition box
and pathetic attempts at crossing rendered the front line impotent, as did that
aforementioned lack of composure. Only Haris Vuckic looked the part, and was
not only a class above most around him up front, but saved Rangers’ backsides
with a couple of colossal defensive clearances, one of which was a certain goal
otherwise.
Defence was nervy, shaky, and thoroughly
unconvincing. Queens’ flankers were rarely
closed down with crosses raining in on Cammy Bell’s goal, and Rangers’ keeper
himself seemed a tad unreliable. Zaliukas made a couple of errors but he
desperately tried to take weight off the back line by running the ball out;
risky, but it worked and he was able to give the others respite.
Darren McGregor, surely Rangers’
player of the year overall, had an absolutely hopeless match. He looked
outright scared, with all the balance of Bambi on ice. He was at fault for Lyle’s
opener for the visitors, and his atrocious afternoon was summed up with an
absolutely ridiculous clearance which went straight to Queens’
back line.
Only Vuckic really stood out
here, although Wallace had a reasonably decent game and deserves a mention for
scoring the goal which took Rangers to the playoff semis.
But Stuart McCall has major work
to do if he is to get it right for Wednesday. The performance we saw at Ibrox
was simply not up to the level we will need to get past Hibernian, and was
nowhere near the performance in the reverse fixture.
The final 5 minutes were outright
embarrassing, as Rangers were rendered incapable of keeping the ball for more
than a pass, as Queens totally dominated.
McCall would do well to revert
back to the exact team of the first leg, taking Clark
out and reinstalling Smith, and putting Vuckic behind Miller where he can do
more damage.
Rangers are capable of much
better than this; McCall has got more out of them in the past, but of course
the one difference is each match is now essentially a cup final and utterly
critical – and none of these players have ever experienced this situation of
playoffs before.
That showed yesterday. We can
only hope it is gone by Wednesday.