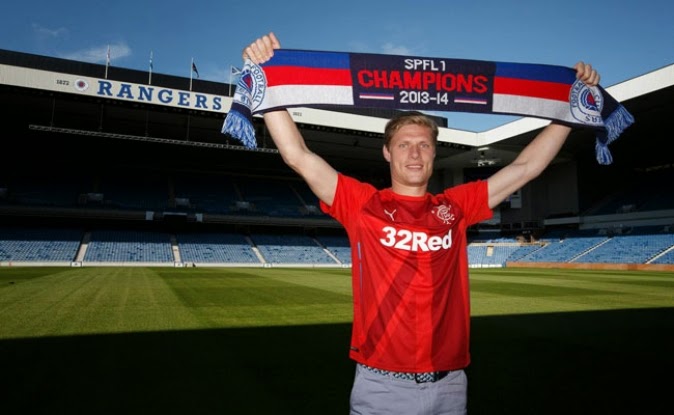 With today’s sparkling news that
McCulloch, having appealed (and lost said appeal) his two-match ban, will miss
tomorrow’s visit of Hibernian at Ibrox, it will be the first competitive match he
has missed for as long as the support can remember.
However in a wham-bang quadruple
of good news, his absence is not the only fillip when Rangers entertain the
Easter Road outfit.
Tomorrow’s match in Govan could
be the most new-look and refreshing defence Rangers have had in well over 24
months.
No Lee McCulloch, and no
Simonsen, with the accompanying likelihood of no Foster either. Bilel Mohsni is
back from the Africa Cup of Nations but he too is not available through injury.
Sadly, as we know, the promising
Remie Streete pulled up v Raith and his condition is not good. He too is out.
We know for sure Lee Robinson
will keep goal, and it would be in theory that the back four was Faure,
McGregor, Zaliukas and Wallace. But given his freezing out, Zaliukas is the
contentious one of that selection.
No one knows why the Lithuanian
simply is not being used since he joined, given he is a capable enough defender
if no Thiago Silva, and rumours have abided of alcohol problems incurring the
wrath of management. But Marius did feature in an unders match on the fourth of
this month and scored a goal, playing well in the process by all accounts, so
his complete airbrushing from Rangers seems a bewildering situation.
With the visit of a fine Hibs
side tomorrow and a chance for a half-decent defence in the offing, there is an
opportunity for Zaliukas, yet there remains no mention of his existence by
Rangers. His recent opportunities have been restricted to the youths.
Bizarrely the official Rangers
site spins all this as a headache for McDowall, while clearly fans believe the
exact opposite.
A thinned down and streamlined
Rangers defence with a removal of rubbish and the addition of players with
something to prove.
Problem is, once they prove it,
Simonsen, Foster and the Great Jig will just stroll back in and take their
place again.