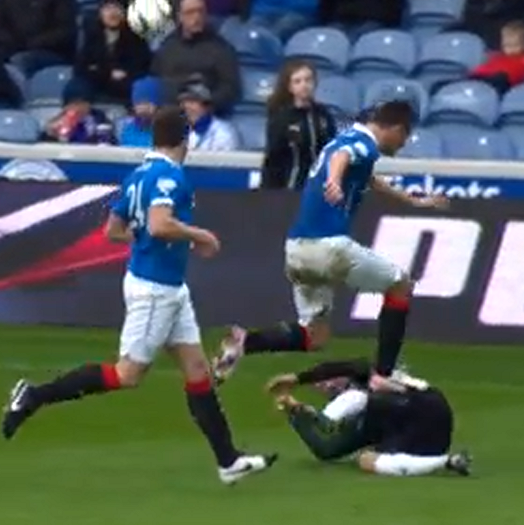 As per the last entry I recorded
about Lee McCulloch, regular readers of ibroxnoise.co.uk will be only too well
aware this site is not his most ardent supporter. Over the years I have been
heavily critical of everything about him, in a football sense, and it appears,
in the past six months, that fellow fans have begun to see why.
With the news that ‘Jig’ has been
offered a two-match ban by the SFA for that ridiculous stamp on Raith’s Carrick,
it is yet another episode highlighting his absurd uselessness and now bordering
on thuggery.
As I previously highlighted, he
resorted to it v Celtic as well, twice in the same match, with an elbow and a
stamp (on Guidetti) to his credit, while v Raith the trodding on a felled opponent stood out
like a sore thumb.
Rangers fans all over Twitter are
overjoyed at his banning, with several sarcastic tweets pleading with the SFA
to make the ban longer.
Jig does have the right to
appeal, of course, by 3PM today, which would automatically free him up for the
visit of Hibs on Friday, but the hope from most fans is that he will not,
eliminating him from the starting XI and giving Rangers the slimmest chance of
winning.
His presence in the team is
rotting away at the hope of improvement, and with the decent Darren McGregor
dropped to accommodate him (and Remie Streete) last weekend, the only way to
force Lee McCulloch out the first team is to ban him.
Jig, your time is most definitely
up.
Walk away with the last remaining
shred of dignity you have left.