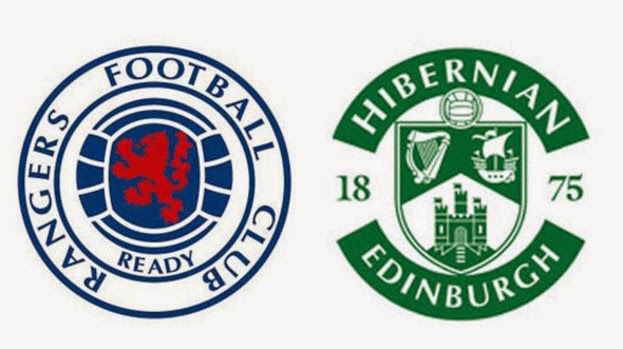 No denying the run-up to tonight’s
match has been anything but smooth, but with Rangers these days, when is it
ever?
Caretaker manager Kenny McDowall’s
managerial record for Rangers makes for dismal reading. Five matches, and only
two wins, both against horrendously poor teams in Dumbarton and, admittedly,
Rangers’ bogey team Alloa.
Otherwise the Ibrox men under Mac
have come totally unstuck against Hibs, Raith and Celtic, and that last result
v Rovers at Ibrox was another absolutely abominable display in which next-to-no
players achieved pass marks.
Subsequently, the visit of Easter
Road’s finest is hardly being awaited with excitement and anticipation.
Hibernian, after a sticky start, have hit form at a good time – they have not
lost since Falkirk overcame them on the 6th of December, and in the
interim have won 6 of 9 matches to find themselves a point behind Rangers.
Rangers’ ‘advantage’ (albeit
given recent results it barely is one) is three games in hand over Alan Stubbs’
men, but on pure form, there is no advantage at all.
Rangers of course go into this
one with a huge amount of forced changes. As brought to you yesterday, both
goalkeeper Steven Simonsen and ‘defender’ Lee McCulloch are suspended, with
right back Richard Foster highly doubtful through injury.
Furthermore, Remie Streete
remains sidelined, as does Bilel Mohsni, and as per my entry yesterday, Marius
Zaliukas’ whereabouts stay a mystery. Another injury absentee is David
Templeton, but given his erratic form and failure to convince any manager of
his worth, his absence appears to be an irrelevance. The other three Newcastle loaness
currently injured remain so.
There is much call from the fans
to give young defender Ryan Sinnamon a shot at the back, but regardless; the
rearguard will be much-changed from the rather disastrous one haplessly
bumbling its way through matches in recent months.
McDowall is likely to opt for
Black and Hutton sitting in a two again, with Vuckic, Law and Smith ahead of them
in a three, while Miller or Daly will spearhead the attack, or what goes as one
these days anyway.
Or he might choose something
completely different. Predicting McDowall’s teams is either incredibly easy or,
since the loanees showed up along with injuries, next-to-impossible.