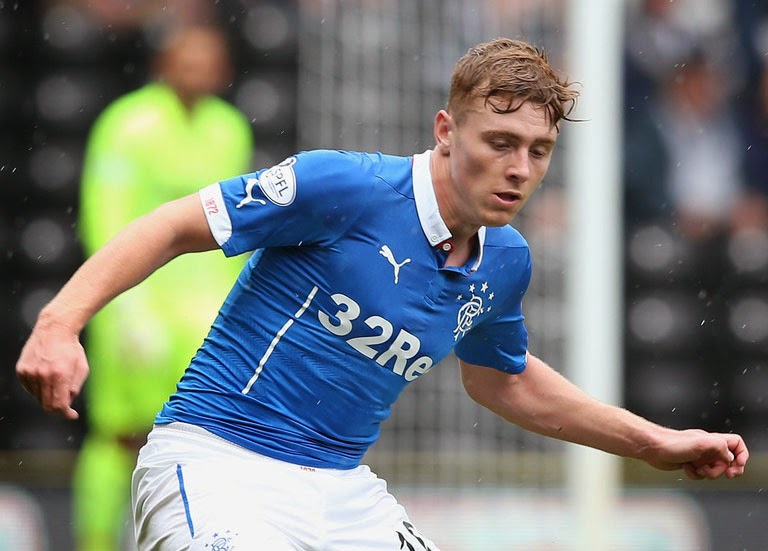 After my last entry focused on
the absolutely abhorrent treatment of Ian Durrant, barred from the Club for 14
days, presumably with a view to forcing him out, it summarised how Rangers
simply lurch from one disaster to another.
And this morning that other
disaster broke with the news, perhaps slightly inevitable in light of
everything else that is currently going wrong, that star player Lewis Macleod
is on the verge of a move to the English Championship and sixth-placed
Brentford.
This has been a huge fear for
fans, that the crown jewels like he and Lee Wallace would be pawned off to make
up for the shortfall in revenue, and those fears have borne fruit with the £1M
deal that is on the table for Macleod’s services.
Currently undergoing a medical,
Macleod was the one big hope for the team, the hero supporters pinned all their
hopes on, and with that now taken away things look even gloomier in Govan than
they already did.
As regular readers to this blog
know I have afforded the board a little more leniency than most observers have,
even those of a neutral persuasion, but when news broke a few days ago of ‘The
Three Bears’ (Park, Taylor & Letham) proposing a £6.5M offer to underwrite
the share issue and give the Club desperately-needed financial stability, the
only response we heard was last night’s breaking story that chairman David
Somers has been desperately seeking investment from the likes of Brian Kennedy.
Consequently instead of giving
TTB any sort of shares/power and doing what is in the best interests of the
Club’s future and financial parity, Somers et al apparently dismiss the
multimillions on offer and instead pertain to sell the star prize at Ibrox for
around a third of his market value.
This is pure self-interest.
Nothing more.
With no Lewis Macleod, Celtic
will trounce Rangers in February, and promotion itself looks increasingly
distant. Crucially, admin 2 is starting to look horrifyingly inevitable.
The Club has a shortfall of over
£8M. I am not blaming the board for that, those are the circumstances in such a
drop in revenue compared with outgoing costs and I have addressed them many
times before.
But to reject a big financial
injection purely on the basis of keeping your seat on the board and a nice
salary is completely at odds with the best interests of the company.
Somers’ and others appear to have
no intention of accepting TTB’ offer, which would give the company breathing
room and manage to scrape the Club by till the end of the season. Especially
given the amount of ST’s that would start to shift as a result of such action.
This is not me saying I trust the
likes of Letham and co. – after all, he has already made a small profit on a
loan at Rangers, but the fact is he and others are offering £6.5M and the
current board have simply failed to find investment.
But no, seems better to save
one’s own seat and job rather than relinquishing power so the company becomes
financially stable.
And lose your star player in the process.