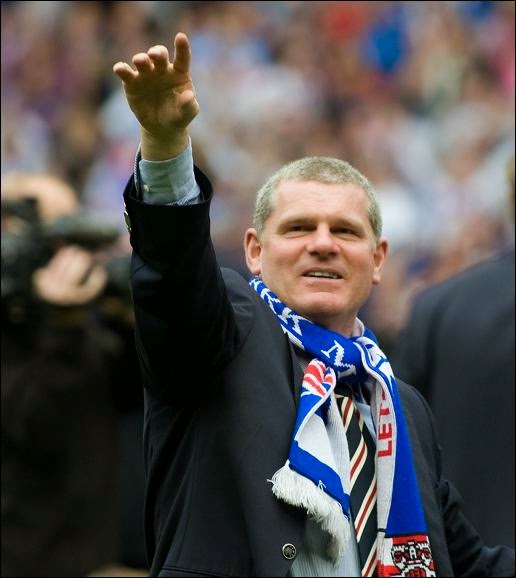 After the humiliation suffered at
Easter Road on Saturday, Rangers fans could have been forgiven for thinking
they might manage a full 24 hours of respite, whereby the forces-that-be would
cut the long-suffering supporters a full day of slack and let them be for a
while.
And, indeed, that was looking
good until news broke late last night of yet another acrimonious moment at a
Club which seems unwilling to conduct itself with any decent conduct whether on
or off the pitch.
On Sunday evening, the latest stage
of a horrible, drawn-out soap opera with no obvious plot arc or ending took
place when loyal servant Ian Durrant, already cast away to the unders following
McCoist’s departure, found himself outright barred from Rangers for a
fortnight.
Simply put, he was told to stay
away for 14 days.
Now, no one is suggesting Durrant
is one of the great assistant coaches, indeed questions have often been raised
about the possibility that he does next to nothing productive within the role,
with a curt gag often cited about him simply placing the cones in training.
This may be true, he might not be
one of the better counsel for which a manager can turn to when in need of
advice; but it is absolutely not an excuse to outright ban the man from
Rangers.
Whoever gave this order, be it
Ashley, Llambias, Somers or otherwise, has truly insulted the Rangers support
as much as Durrant himself by conducting themselves in a manner which pertains
to no level of dignity I have ever perceived. In blunt terms, by targeting and
attacking a pretty harmless man in the grand scheme of things, the board
(whoever exactly it was) has acted in a callous, disrespectful, and utterly
‘UnRangers’ manner.
It is bluntly true that Durrant
will never be a great assistant, but it is no excuse to treat him so coldly. To
ditch him to the unders then ban him from Rangers is basically bullying, and
while his ties to McCoist are probably the reason motivating such action,
nevertheless he himself has hardly acted in a way to warrant such drastic and
humiliating treatment.
We know Ashley is a cut-throat
businessman, and thoroughly ruthless, but if Durrant was not in his plans (if
this was his call) then just outright sack the man and pay his contract up (far
less than the value of McCoist’s). Quick, fair, and done.
This demotion then barring is
frankly horrible and Durrant is one of the few during the past few years to
keep his head down, behave himself well enough and while hardly emulating the
likes of Smith and Struth, certainly act more like a Ranger than those
currently torturing him.
And to think this blog is
considered pro-board…