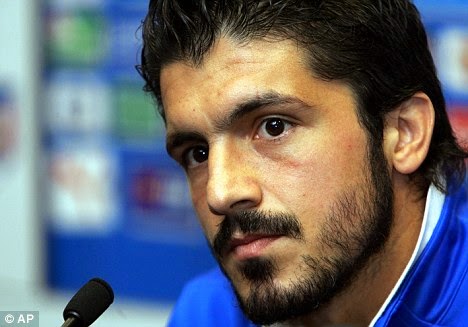 It is hard whether or not to see
this as good news. Yesterday news broke of former fans’ favourite Rino
Gattuso’s final resignation at Greek outfit OFI, following an initial attempt
in October which the Italian reversed soon after.
There has been speculation
linking him to Rangers as new manager for some considerable time, albeit none
that was taken hugely seriously, with his odds being rather long to say the
least.
Now, however, there is serious
credence to the story. Earlier this month he said:
“I only played for a year and a half at
Rangers but it was a big pleasure to do that, so of course I would be
interested in the job there.”
I have been told, and I quote,
that Gattuso is “awfully close” to the Ibrox hotseat now, and we will see if
that comes to fruition.
Readers of this blog who know me
will be aware of my strong support, not only of course of Rangers, but of Milan, who Gattuso
famously plied his trade with for a decade. He is a massive bond between the
clubs, and married a girl he met while here in Glasgow.
He considers Walter Smith a
‘father figure’ and used to speak frequently to him on the phone. Whether he
still does I am less sure.
So consequently while fans
(myself included) are right to be dubious of Gattuso’s managerial credentials
given they are not exactly illustrious (he has failed at FC Sion & now
Crete), from a completely selfish and sentimental point of view this is an
appointment I would favour.
Fans are being given little to
cheer about, but Gattuso is a well-loved former Bear whose heart, like my own,
is somewhere between Rangers and Milan.
He loves these two clubs and would do anything for either of them, and his
‘coming home’ would incite a little excitement among the support who have
absolutely nothing to cheer about at the moment.
With Lewis Macleod as good as
gone and Nicky Law following him (to Huddersfield)
it does just feel like one piece of depressing news after another.
So the return of a little bit of
Ibrox soul might be some inspiration this beleaguered fanbase desperately
needs.
Last but not least it would have
been the legend that is Sandy Jardine’s 66th birthday today. Oh how
we miss his leadership and dignity at a time when the Club appears to have
forgotten what such concepts mean.