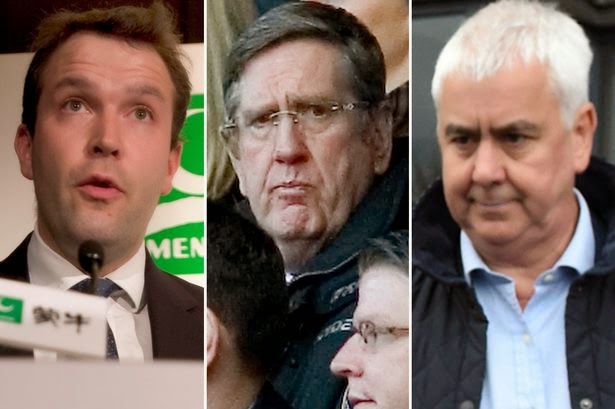 To say 2014 has been another
tumultuous year in Rangers’ history is an understatement. This blog has been
filled with catastrophe after disaster after chaos.
But this morning, a game-changer
may finally have taken place at Ibrox with the revelation that those ‘Three
Bears’, Douglas Park, George Letham and George Taylor have seized a serious
amount of control with the buyout of Laxey’s shares.
The Three Bears, from absolutely
nowhere, have thrown a curveball into the board’s plans with a swift and sudden
purchase of 13,299,415 shares to end up with around 20% of the company.
Rather than waiting around to
hear an answer from Somers & Easdale regarding the share issue underwrite,
they have gone ahead and bought out Laxey to give them the single-most clout at
Ibrox.
No fuss, no tabloid inches – they
put their money down and now have massive control.
While Easdale still has more
shares in theory, his are by proxy while Park, Taylor & Letham directly own
all their own, which means they have more direct control.
Without sifting through each of
these new players in too much depth, it is Douglas Park who stands out the
most. A completely credible and successful businessman, his BMW dealership,
servicing and historic business dealings make his CV basically impeccable. The
fact he is a well-known Rangers fan merely adds a cherry on top.
In simple terms, Park is more
than capable of steering Rangers, and with his group now being in majority
control of the company, it has completely changed the landscape.
Mike Ashley cannot be forgotten
though and he will have been blindsided by this move; his response will be
telling.
But Rangers fans, at long last,
have men they can trust with their feet in the door at Ibrox.
Bears can dare to smile a little. The good guys may just have won.
Happy New Year and WATP.