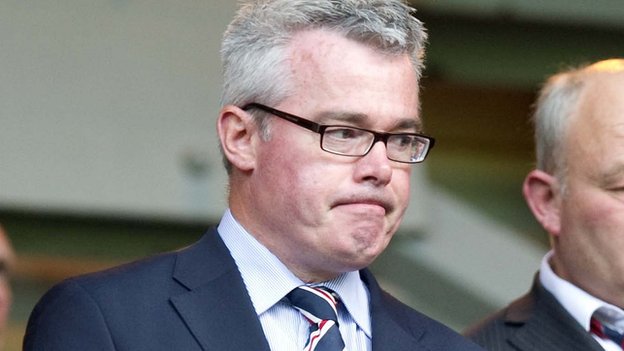 The phrase ’48 hours’ does not mean a popular 80s action comedy starring Eddie Murphy any longer to Rangers fans. It is the phrase which seemed to permanently precede any announcement by the administrators regarding a preferred bidder. Delay followed delay and frustration mounted over the repeated failure to confirm one way or the other who the chosen bid was going to be from.
Finally, on Thursday the 3rd of May Duff & Phelps belatedly declared the preferred bidder was to be that of Bill Miller.
Throughout this entire administration period fans have had to endure several different parties procrastinating over making a solid bid. Brian Kennedy, Bill Ng and the Blue Knights have all flirted with taking the reins, but no bids were ever considered acceptable from any of these parties, leading to Ng in particular pulling out. It has been an excruciatingly tedious procedure, but finally a chosen party has emerged, and now American businessman Bill Miller has been given a two-week period of exclusivity for the operation of due diligence.
It ended up being a two horse race between The Blue Knights, now with former solo bidder Brian Kennedy onboard their cause, and the aforementioned Miller. The support for the former was very strong, with a sizeable portion of the support in favour of like-minded and in places, familiar faces taking control of the club. With well-known supporters’ clubs like the RSA and particularly the RST endorsing the consortium led by Paul Murray, the Knights looked to be the favoured choice given their affinity with the club and the consensus among their followers that they had the club’s best interests at heart, and would crucially involve the fans heavily in the running of the club. A shareholding issue had been proposed by the group, one which would lead to supporters having direct ownership of the club. This was something a great deal of the faithful held in high regard, and their allegiances towards the Knights resulted.
The latter, however, seemed to be regarded by many supporters as too unknown and dubious to be a viable candidate. His newco merge proposal was greeted with disdain by many bears, believing this plan would liquidate the club and erase the proud history held so dear. There was also the concern of his motivation; why was this American businessman, famous in the US for his trucking empire and brief foray into Indycar racing, so interested in taking over an ailing Scottish football club?
However, the significant difference, and presumably the reason for the choice of preferred bidder, is that Miller bid hard cash of £11M, reportedly already installed in a holding account awaiting a successful exclusivity period. The wealth of the Blue Knights, on the other hand, has always been a thorny issue, with a lack of clarity about exactly where they would acquire the funds for the takeover from, and exactly how much they had.
On the other hand, Miller, by selling shares in his own company since October last year has raised $25M in hard cash. His funds have a clear origin, even if his motives do not. Ellis Smith, Business reporter for the Chattanooga Times Free Press stated of Miller:
“He has made a lot of money for a lot of investors.”
Smith also stated Miller’s modus operandi was to take companies heavily in debt and turn them round to become profitable. This still does not answer why he is particularly interested in Rangers, given his location, but it does offer a possible insight as to what he does, and how it relates to the club’s current predicament. Is Miller being nigh-on altruistic here? As a successful businessman with experience in reviving failing companies, does he see Rangers as a challenge he feels capable of taking on? There is no denying that in the business world, American investors and traders would know of any large institutions in the mire, and given Rangers’ obvious global fame, quite possibly Miller sees a sports team in a bad way and quite literally ‘wants to help’.
It is a tad far-fetched, but I can offer no alternative reason as to why a US trucking tycoon is interested in taking the Ibrox reins.
Sport is not a particularly profitable industry for those who invest – but Miller does not appear driven by finance given his own salary, as the head of Miller Industries, is a relatively modest by comparison $330k.
Of his interest in Rangers, Miller had these words:
“I have a knack for seeing what the future can be for a troubled business. I believe my plans are the best for the club’s long-term success. I would not be interested if I did not have the best interests of the fans, team and club at heart. My view is to save the club, put it on a stable footing, making profits and not losing money so it qualifies for UEFA, and ensure it can have a strong future to match its history.”
Pretty positive indeed, but then, the last guy in control at Ibrox hardly began his reign with negative comment either.
In the end, Miller appears to have won the takeover battle by way of sheer hard cash. The Knights were unable to match this. Add Miller’s apparent business acumen and ability to save ailing outfits, and maybe he is the right choice.
Only time will tell.