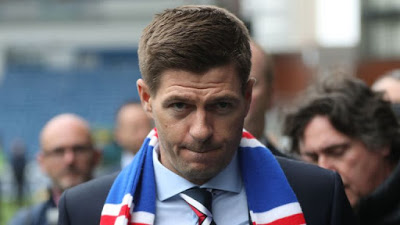 Rangers fans have been presented with two breaking ‘stories’ over the last 12 hours, one exiting Alfredo Morelos to Lazio, the other Steven Gerrard to Bristol.

Let’s look at both these in turn.

Morelos has been linked to every club out there, and we know he’s being monitored by many outfits – Rangers hope to secure around £20M for him, and that’s what the Italian giants would have to pay for him, just as Celtic have asked for their 22-year old defender Ajer.

Lazio aren’t alone, Morelos has been linked to AC Milan and Napoli in Serie A, plus a host of clubs elsewhere in Europe too – whoever does make that move for him will need to dig deep, but equally Rangers’ problem is the guy doesn’t want to be here any more so we don’t want an unhappy player, which of course devalues him a little.

Then there’s Gerrard. This is a real story, but Bristol City have next-to-no-hope of signing him – well, we say that, but we’d have sworn blind we weren’t losing Souness back in the day and look what happened there. We previously said Gerrard will only leave for either Liverpool or a huge club he can’t turn down, but we’re not so sure any more.

The story goes that Bristol’s billionaire owner is going to give a new manager, Gerrard, ideally, in their minds, a major warchest to push for promotion this season and naturally the press have gone nuts for the news.

But Rangers’ pre-season (more on that later) could probably be going a bit better and these two stories are not exactly overly welcome to a settled rhythm.

We need some good news.