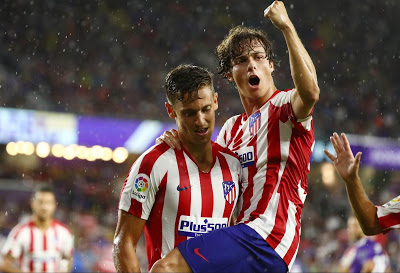 We often get the accusation of ‘fake news’ which is basically the way for people who disagree with an opinion or who are unhappy with a story to dismiss it. Thanks Donald.

But when we saw the story about Atletico’s Rodrigo Riquelme, despite the Joey Barton and Jermain Defoe fallacies which tell us any implausible signing is actually possible, we had to raise one major eyebrow up at this preposterous story in which a 19-year old budding superstar worth into the £40M range would turn his nose up at some of the biggest leagues in the world in favour of the Scottish Premiership.

Make no mistake, Riquelme is an extraordinary footballer. He made our promising kids like Kai Kennedy and Nathan Young-Coombes look like embarrassments when his Atletico side came to Scotland and put our lads to the sword.

This is a potential superstar, and with Atletico’s Joao Felix, such a stellar performer in Portugal but hasn’t done it in Spain to anything like the same level, costing £130M, a kid like Riquelme who IS doing it in La Liga and their reserve tier, is absolutely beyond the remit of Rangers.

Celtic too have been credited with an interest – after all this kid may just be the most lucrative Bosman in Europe this summer, but they’ve no chance of getting him either.

Riquelme is in that enviable position of a rising superstar – having the pick of Europe’s elite and not costing them anything.

Everyone will want this lad – even if Spanish-based Marca did namecheck both Old Firm clubs, they also admitted the German, English and Dutch leagues are already swarming around him and when you’re up against that level of competition, forget it.

In short, unless Steven Gerrard pulls a miracle here, Rangers have as much chance of getting Riquelme as yours truly does at pulling Margot Robbie.