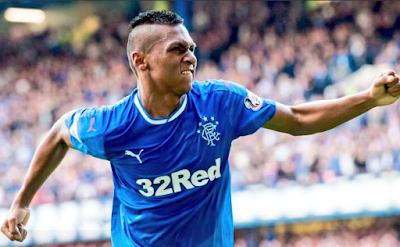 As we said in a previous entry, it’s pretty safe to call Rangers’ current form a bit of a crisis. With just two wins in five league matches, it’s the worst time of the season to lose the momentum we spent since May 2018 working hard as nails to build up. Celtic are now 12 clear, albeit we have a game in hand, but given we just drew with the side we play that game in hand against, 3 points v Saints are anything but a given now.

So, after that depressing intro, the topic of this one is one we said we’d discuss later; the ever-plummeting form of Alfredo Morelos, who has been missing since Motherwell.

We’ve rambled enough about the whys, and the conspiracy theories one way or the other, but it frankly no longer matters.

Morelos is currently in some of the worst form we can ever think of any Rangers striker being in. Remember Jeffers, or Ostenstad? These were two of the most diabolical strikers Rangers have ever suffered, and Morelos, currently, resembles them.

You can resort to all the stuff about work rate and making mischief for the defence, but unfortunately he is now lacking both of these – most times he now actually gets in behind, and either manages an unintelligent shot against the keeper, blazes wide, or was in fact offside in the first place.

We have to accept he is in shocking form, and unselectable based on that.

Mercifully the in-form Florian Kamberi is by forced suspension and injury upon others literally the only option Rangers actually have for Wednesday, and it’s a matter of coincidence he’s probably the most suitable player we actually have for this match.

The Colombian is clearly in a bad place right now – but he had a bad drought in late 2017 for 10 matches and came out of it. Will the same happen here?

Things are so bad right now we’re wondering if the lad already peaked, and is now on a downward spiral, period. We know the off-pitch stuff has affected him too, of course it has, but frankly that’s a side issue now.

We can’t keep making the excuses, nor can we afford passengers.

And for the first time plenty of Rangers fans are advocating the Colombian’s sale this summer.

We are starting to think his time at Ibrox is indeed drawing to a close – but if he keeps up this hideous form, those £50M stories will look completely ridiculous and we’ll be over the moon to get £5M.

Make no mistake, late November Morelos could have been Scotland’s first £30M+ striker, given his lethal domestic and UEL form.

That’s all gone now. And so has his value. For now.

We do feel his time in Govan is drawing to a close now, for just or unjust reasons, and we’d wish him the best.

But in the here and now, Morelos just cannot be selected any longer.

What now for Morelos?
Created with Poll Maker