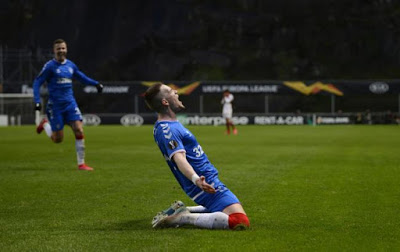 Ryan Kent, hero of Braga last night, made a major concession in his post-match interview which may just help in justifying Steven Gerrard’s recent criticisms and explain the domestic dip in Rangers’ form while paradoxically excelling in Europe.

As we know, the winger smashed a beautiful winning goal on the continent to take Rangers to the final 16 of the Europa League, but it was his post-match admission which revealed the most.

“The fact we’re the underdogs in this competition there’s less expectation and tension in our play. We go out there and play with more freedom and we got what we deserved.”

This really is the problem in black and white. Post-Celtic win, Rangers slumped abysmally on the home front, but still managed an astonishing win over hot-form Braga, before slumping again to St Johnstone. Then travelled to Portugal and deservedly beat the country’s most in-form side.

It’s all down to pressure, winning, and expectation.

Kent has proven his manager right, for better or for worse.

Which means this Rangers team, while the league is gone, really has every chance of doing serious damage in the Europa League.

As long as we don’t pressure them, of course…