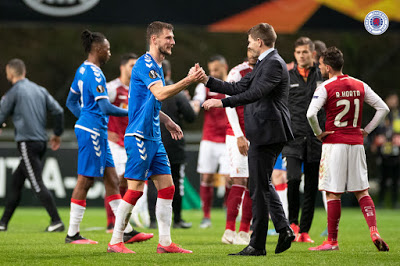 It’s starting to get a bit serious for Rangers now.

While we’re not going to get ahead of ourselves, being in the last 16 at the start of the season would have been considered exactly that, and convincingly beating, over two legs, the form side in Portugal while dispatching some of the best Swiss, Dutch, Danish, Polish and indeed other Portuguese sides on our way there is starting to look business end.

Domestically this team is all over the place, we get that, and nothing which happened tonight changes what’s happened over the past two months on terra firma.

But there is absolutely, unequivocally, utterly no doubt this is a Rangers team which is defying the odds repeatedly in Europe and which we can now dare to dream about what it can achieve in this tournament.

If it had managed to overcome an average Belgium team, or maybe some mob from Finland on its way here, we could maybe look at where we are and say that the side got lucky.

But it didn’t – it took the hardest, most difficult route possible to the last 16, and has got there on merit, turning over a brilliant Braga side that’s been destroying everyone else domestically. And putting away Wolves as well.

We’re not explicitly saying we have ambitions of making this final, but by this point, why shouldn’t we?

Why shouldn’t this ridiculously over-performing Rangers team have sights on May’s showpiece?

It might be rank rotten on the domestic front, or inconsistent at best, but any older Bear can tell you just how good Valencia were in Europe in 99/00 – the one who destroyed us. They were absolutely woeful domestically, in fact they were near the bottom of the league. But they got to that final of the Champions League.

Getting ahead of ourselves? Why the hell not?

Why not dare to dream?

Nothing about this season has been predictable, and we can see zero reason to stop Rangers getting further in this tournament.

We’ve defied every odd, we’ve scared a tonne of top European teams, and we have earned the right to believe what we want to believe.

What can Rangers do in the UEL?
Created with PollMaker