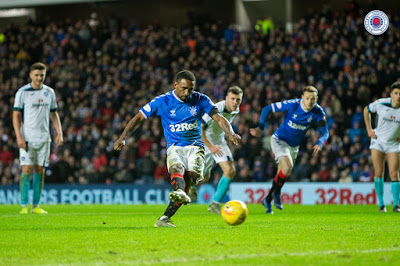 We’ve discussed Jermain Defoe a lot today – not a player we’ve really covered that extensively in the past on the site, but there’s something we have to really bring up.

As we know, Defoe has been a great signing – despite his advancing years, the forward has a stunning 12 in 18 in the SPL this season, and a total 16 in 28 in all competitions.

He’s been as prolific at Ibrox as he was anywhere else in his career, save Bournemouth where he barely played.

But there’s a slight catch – Jermain Defoe, brilliant though he is, simply cannot play as a lone striker to the same effectiveness as Alfredo Morelos.

He is Morelos’ backup, and we know now that the Colombian is the justified first choice – Stevie did say in the split last season that there was no first choice any more, and both strikers were equal, but that isn’t true now, if it ever was.

But the issue is Rangers specifically play with one striker flanked by two wide men, and that’s a role that fits Morelos down to the ground.

It does not, however, fit Defoe at all. Sure, in some matches it does work – take his magnificent off-ball running at Easter Road in December. He dragged the defenders all over the place and scored a goal into the bargain. But there was space there, because the home team didn’t sit in.

Against both Stranraer and St Mirren a different story – yes, he scored in both, and it’s hard to be critical in that sense, but he struggled to find room, and was unable to make the runs he would usually, because two banks of five were suffocating him.

Which is why when Morelos isn’t available, Defoe isn’t always a good plan B.

Against better sides than Stranraer and the Saints, who may still sit in, Defoe might find getting a goal tougher. Indeed, at St Mirren stadium he was taken off because of the same reason – he just couldn’t find any space and it took Barisic’s wonder goal to get all 3 points.

And the most quintessential example lately – Killie at Ibrox last month. Defoe was so ineffective he had to be hauled off on 58 minutes – Killie playing the sitting in style, but much much better at it than St Mirren. Guess who came on for him and scored the winner…

Some matches just don’t suit Defoe, and this is why Rangers need another striker – a big bustling powerful target man who is strong like Morelos and can still score in stuffy matches where opponents defend for 90 minutes.

Defoe has his place, and we absolutely love him, but while a tonne of matches fit his qualities, and his goal tally reflects that, there are times when someone like Morelos is needed. But if Morelos is injured or suspended, then Rangers are in trouble.

Unless, that is, they can find the right man in the next week to fill that hole.