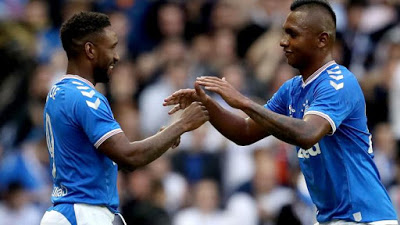 As we discussed earlier, the new contract for Jermain Defoe and the finally signing him down to a permanent Rangers deal is as much about holding onto Alfredo Morelos as it is securing the former Spurs man.

We talked about him as a role model and mentor, but there’s something else.

Alfredo Morelos admitted recently he felt isolated and down after his best mate Daniel Candeias left, a player who was his-then mentor and translator too.

The two were thick as thieves and the Colombian definitely felt the gaping hole the Portuguese left behind, and it left him in a very lonely place.

Until, that is, Defoe (and the others) made up for that void by getting closer to the striker – Defoe especially has become Morelos’ best friend at the club now it seems, and is his perfect mentor both professionally, psychologically and emotionally.

And getting him to remain for another 18 months gives the Colombian the extra mate in the group, the mentor he needs, and avoids another Candeias situation of losing someone else the former HJK striker has bonded with.

Making friends isn’t the hardest thing, but keeping the good ones is, and Morelos wants someone like Defoe in his life right now for sure.

And Rangers have clearly learned from the Candeias situation how important that is.