Home Rangers Have the future stars of Ibrox just risen? 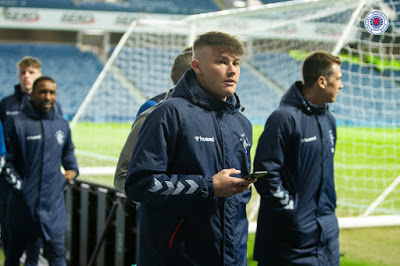 We have a been a little negative over last night’s cup win v Stranraer. Yes, it was a pretty underwhelming performance and should have been far more emphatic against a side of such lowly status as League One’s bottom side, but it got the job done, and we were especially thrilled with the performances of both Nathan Patterson and Kai Kennedy.

Regulars to the site will know we’ve spoken quite a lot about Kennedy in the past especially, praising him to the hilt for his performances with the youth – he’s really stood out many times, he and his partner in crime Nathan Young-Coombes, and both have been a major reason Rangers’ lads have done so well in the Uefa Youth League.

And they both grabbed their chances with firm hands and while we accept the standard of opposition was hardly marquee, more senior members of the squad struggled in the same match, so that’s hardly a case against them.

No, Patterson was confident from the start, and while the boy has a little filling out to do (he is only 18 after all) his movement was good, and his crossing was mostly excellent. He maybe missed with one or two, but that’s already a lot better than his more illustrious team mate James Tavernier.

He was clearly told to play the same role, to get forward in the same positions, and the instruction didn’t faze him at all – he was comfortable dribbling, and he even beat a man once or twice. Whether this undermines the importance of Tavernier himself or just highlights how good Patterson is capable of being is for better people than us to know, but Patterson really did bring it on a night he was probably under a little pressure to do so.

Kennedy wasn’t far behind – he didn’t get a lot of the ball in his late cameo, but he did do well with one good run, beat one man, and got a fine pass off to Arfield. He showed hunger, energy, and a decent reading of the game where he drifted through both channels in order to support.

Are they the future of Rangers FC? Put it this way, the fact they looked at ease in a serious competitive environment was only positive – and it bodes well.

But we’ve seen our youth excel before only to be shipped out anyway, so we’re not going to assume a thing.

But they both did their cases no harm at all.