Home Rangers “Close to magnificence” – the truth about Steven Gerrard 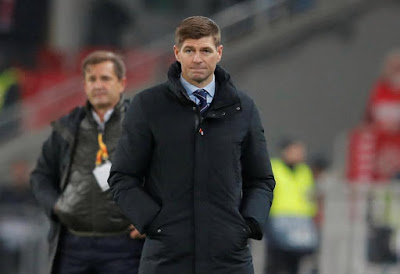 We know we’ve been incredibly negative the past 24 hours on Ibrox Noise, being critical of nearly everything especially Steven Gerrard.

It’s hard not to feel extremely despondent when the worst side in the SPL, who hadn’t won since October, not only beats you, but beats you deservedly and well, but that said, while form has been painful this calendar year, the progress of the club under the manager has been stark.

We’ve gone over and over the mistakes and errors of late, but the truth is we know fine well how much a better position this club is in compared with maybe 18 months ago.

Yes, form is extremely ropy right now and a lot of personnel decisions are extremely questionable, but in the grand scheme of things we’ve still beaten Celtic three times in just over a year, we’ve had two unbelievable European runs and one of them continues into the last 32, and we’ve topped the table a couple of times.

Oh, and beaten Celtic at Parkhead for the first time in a borderline generation.

Have we now lost faith in Stevie after recent form?

Basically, the guy is his own worst enemy at times – for all the great that he’s done, and there’s tonnes of it, there are those little errors he makes which heavily undoes the progress. And those are the mistakes he has to weed out to win the league.

Rangers are still in the league hunt – with two matches v Celtic left this season, it remains in our hands, as long as we get back to consistent winning ways in the SPL.

And the fact we’re still very much in the frame for the title is down to Gerrard and his management.

He’s made mistakes, God knows he’s made quite a few of them – he has some managerial ‘issues’ he has to get over to make that step from potential to actual.

But where Rangers are – 61 wins of the last 100 matches – it’s pretty bloody good in the grand scheme of things.

Yesterday was only Stevie’s 14th loss as Rangers manager; Killie, Celtic, Aberdeen and Livi in the league, Rapid and Spartak in UEL, and Aberdeen in both cups last season, and this campaign just Celtic, YB and Hearts have actually beaten us.

What we’re saying is the picture is actually a lot better than it maybe feels right now, and the simple reason is this loss was to a terrible team for the first time.

Rangers’ losses under Stevie had always been to good teams – either UEL sides or top-half SPL ones.

This was a bit different.

Yes, there are a lot of questions to be answered, and changes will surely come from this, but the overall picture is definitely not the doom and gloom it rather feels like.

Especially not if the manager can weed out those glitches and refine his style.

Because he’s close to being magnificent.