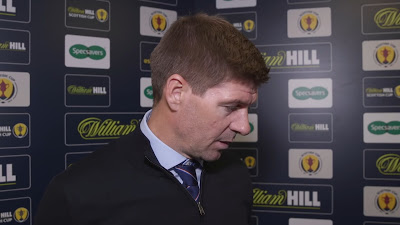 Steven Gerrard’s demeanour post-match last night could not have contrasted more with his Old Firm reaction if it had tried.

We won’t bother quoting all his scathing assessments of just how utterly poor Rangers were as a unit, because we agree with them and most sensible fans will.

No, this was following a fairly routine match, that should have been a solid and comfortable win with some good football, which ended up being, if not quite a slogfest, then certainly a bland and unconvincing win against a side literally three leagues lower than us.

Gerrard was far from happy, and more than anything he felt personally responsible for the fans not going home happy from it, and that’s when you know you have a proper manager who isn’t happy with a 2-0 win at home.

Quotes attributed to him say he found himself bored, and we do know he said he was unhappy with the performance and the contribution from a number of players, and his body language almost implied it was a loss rather than a win.

It certainly felt like one, and the moment we feel it truly symbolised what a rotten night it was was Barker’s appalling attempt at a pass for Kennedy’s easy tap in.

Gerrard has high standards, and his team didn’t deliver on those last night.

Quite the come down from December, and we certainly hope that gets knocked out of them quick because we do not want to be flatfooted once the serious league action resumes.