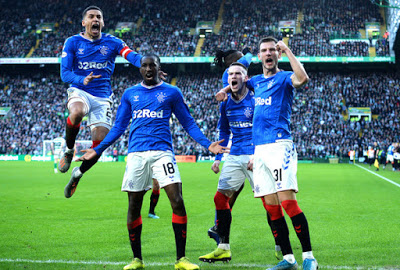 There’s no getting away from how big a result today’s flawless, wonderful, astonishing win at Parkhead was, and more superbly, how utterly unsurprising it really was.

All today was was the League Cup final with better finishing. And it showed there truly is a sea change now in Scottish football where Rangers, put simply, are the best team in the country, where they rightfully should be.

Steven Gerrard’s side was magnificent – ok, Jack had a poor match strangely, but the other 10 made up for him and bestrode like colossi at the cauldron of Parkhead to put away a Celtic side with 11 wins on the bounce.

A side unbeaten at home, a 100% record at home, putting out their strongest possible eleven – and Rangers absolutely blew them away.

This was a stroll of a win – sure, McGregor had a save or two to make, but that Celtic’s last two goals v Rangers have both been invalid gives some idea of how things have swung in the SPL.

There’s no getting away from it – Rangers have taken their mantle back – and while there is much work to maintain that mantle, and the job is NEVER finished, it is We Who Welcome The Chase again, and enjoy our returning position as the best side in the country.

Of course, the SPL is a marathon, and one result may not define everything, but the likelihood is that it does. That Rangers went to Parkhead and won for the first time in a decade, deservingly, borderline easily, shows the change we’re witnessing Scottish football undergoing.

This was the biggest Old Firm match for many, many years – and rather than it being a good even tussle, Rangers were by far the best team on that pitch.

And we have to say it’s all thanks to three men – Mark Allen for his left-field choice to bring in Steven Gerrard, Dave King for agreeing to it, and Gerrard himself for risking his reputation by taking such a huge first step into management.

And here we are, 18 months later, we’ve won at Parkhead and we can only sit back and smile.

Feel smug. Feel happy. We deserve this. And we’ve earned it.

We’re the best. Simply the Best. Better than all the rest. And now it’s official.