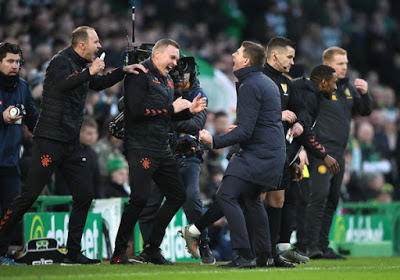 Had no chance with the non-goal, and produced two gigantic saves. Faultless. 10

Some great crossing, consistent defending, his best in a long time. 10

His best ever match as a Rangers player. By a mile. Play like this more and no one will question your selection again. 10

Scoring the winning goal was only the cherry on top of a-near faultless performance. The penalty was ridiculous and they’re just never given. 10

Rangers’ MOTM – two assists, gigantic defending. We’d give him 20 if we could. On this performance, Morelos is no longer Rangers’ most valuable asset. 10

We feared his selection in light of lack of concentration recently, but the player he can be showed up today. Impeccable. 10

Ok, we’ll be honest – he was poor today, his worst performance for maybe two seasons. Not sure what was wrong with him, maybe he missed Arfield. But we won so it doesn’t matter. 7

Goal amazing, destroyed Frimpong first half in a reversal of the League Cup where the RB got the better of him. Total menace. 10

Used the ball well, maybe ran out of steam towards the end but barely a foot wrong in this new reinvigorated RW position. 10

Idiotic red, yes, and his attitude flared at times, but mostly a big performance, playing for the team. He’ll probably never score v Celtic but right now we don’t care. 9

We all questioned Stevie pre-match on the site when we saw the XI and bench, but that’s why he’s manager and we’re not.

He nailed it and deserves all the congratulations for his finest 90 as Rangers manager. 10