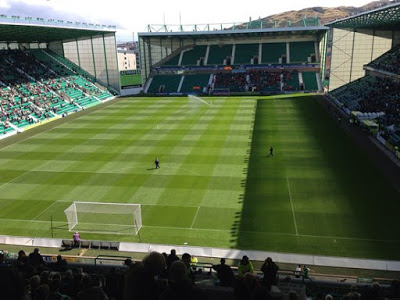 When Alfredo Morelos was ruled out of last night’s trip to Easter Road, while many fans were pleased to be able to call upon Jermain Defoe, a sizeable chunk bemoaned the loss of the Colombian, pointing to his goals and contribution this season.

Defoe, for his own part, was on a very dry run of 6 games without a goal, his longest impotency in front of goal since his loan move in January, and while Ibrox Noise did point this out, we also backed him to rise above it and deliver.

Jermain Defoe was hardly involved last night beyond two wonderful contributions which show just how fortunate Rangers are to have a player of this quality, and professionalism happy enough to play his part when his opportunity comes around.

The first contribution was game-wide:

While Defoe got few touches, and rarely a sniff of goal, his off-ball movement was wizard-like. He pulled Hibs’ backline all over the place, dragged the defenders out of position constantly, and created nothing but space and time for everyone around him. Without touching the ball, Jermain Defoe absolutely destroyed Hibs’ defence.

The second was beyond admirable:

On just about his first significant touch of the ball, Defoe received the ball outside the back post, used a single miraculous touch with his left boot to kill the ball and put it in perfect position for his right to bang home a clinical inside-post drilled finish the Hibs stopper could do nothing about.

While Defoe hardly touched the ball and basically had one useful shot all night, he contributed arguably the most he ever has in a Rangers shirt. His running decimated Hibs’ defence, it opened up pockets for Kent, Tavernier and Aribo to run into, and this diminutive striker showed in a beautifully subtle performance just why Rangers brought him in and why keeping him is critical.

Then add his stunning goal and we can see why, as amazing as Morelos is, we have a genuinely world-class talent in Defoe who is arguably one of the best backup strikers in world football.

We are astonishingly lucky to have him.