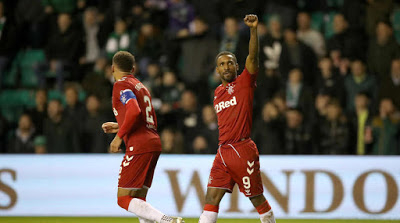 Very very belatedly, Ibrox Noise brings you our ratings from a fine performance at Easter Road, even if off-ball nonsense overshadowed the success of the night:

Had little to do really, Hibs produced no major threat beyond trying to break his neck. N/A

Some of his crossing was outstanding, some of it was shoddy – mixed batch but the thing which stood out about Tavernier in this one was his lack of intelligent decision making. He didn’t appear to make calculated moves, rather crudely going about his business. Still, he wasn’t the worst he’s ever been. 6

Reliable headed clearances and a good enough reading of the game, plus a surprising addition of a touch of more physical defending led to this being one of Goldson’s better matches. He was solid. 7

Actually a little sloppy in this one, Katic demonstrated some of the weaknesses in his game with some occasionally poor decision making – he made no game-changing errors, and was generally comfortable, but it did show why he has a lot to work on. 6

A decent display from Barisic with some excellent width and balls into the box, but the attack on him and subsequent crowd abuse he could have done without and it inevitably distracted him a little. Handled it well though, especially for a bewildered foreigner who’s at a loss as to why he’s being slaughtered. 6

Hard working as always from the Finn, grafted away and used the ball a little better than he has recently, this was a more polished display and although he still lost concentration now and then, he focused better and more tightly. 7

Typical robust hard working Jack who made sure the midfield ticked along nicely and stopped Hibs playing. Got in an excellent assist for Joe Aribo. 8
Arfield:

Another one who is continuing to see an upturn in form, Arfield was part of the three-way midfield triage which looked smooth and well-oiled. He caused his customary stress to opponents and got himself a nice assist for Defoe. 8

Maybe his best in a Rangers shirt, while he faded a touch in the second half his first half contribution was the new improved Aribo, strong on the ball, using it well, and causing real menace on his side of the pitch. Wins a lot of fouls and his goal was sumptuous. 8

Kent’s best of the season by far – full of energy, running, confidence and vigour, his composure was top class and his touches clean and far more efficient. His goal was excellent too and he can be delighted with how well he played. 9

While he hardly touched the ball, his work allowed everyone else to play. Pulled the backline all over the place giving Kent, Aribo and Tavernier so much time and space, and took his own goal ever so well. He was like a kind of trojan horse – barely know he’s there but he’s doing untold damage. 9

Steven Gerrard sprung no real surprises in this one, sticking to the same XI as Motherwell bar one inevitable change, and his team produced a wonderful display at a testing ground. No one let the manager down, and the midfield and attack were excellent. About as good as the boss could have hoped for and his team is hitting form at just the right time for the 29th. 9