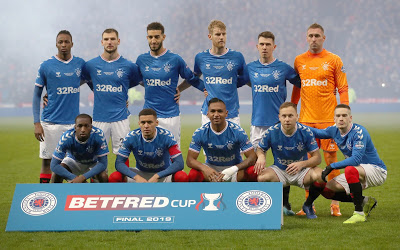 So having all had a chance to mull on the performance and result, we decided to take you through an analysis of observations and thoughts we have over the whole thing. See how many you can accept.

1: The progress under Gerrard is undeniable for Rangers. The designated home side controlled this match, and had countless chances. This was one of the best performances in terms of chances created a Rangers team has had against Celtic for a very long time. Anyone who believes Stevie G isn’t doing a good job based on this match is very wrong indeed.

2: The minute you’re ‘proud’ of the team for its performance when it loses is the day you become a fundamental loser. We can appreciate the heart, we always want our Rangers team to commit, but pride is going too far – we expect this level from a Rangers and we shouldn’t be praising a squad assembled at this cost for putting in a good shift. It’s the least we should expect.

3: Surprisingly, Rangers’ midfield didn’t miss Steven Davis too much. The midfield (and flanks) very much dictated the match, with Ryan Jack having an especially mammoth match. Joe Aribo was ok, but still feels too slow and out of sorts with the Scottish game.

4: Critically, fundamentally, this match showed Celtic still have an edge over Rangers. Even if Rangers play as well as they did, such as they did v Feyenoord and Porto, there is something about the Old Firm fixture no manager since Walter has truly been able to seize. That includes Steven Gerrard. Something has to change mentally, because right now Rangers won’t be able to surpass Celtic if they can’t convert the chances into goals.

5: Some key battles were telling – Ryan Kent didn’t get the best of Frimpong, who was one of the best players on the pitch till he got his marching orders, but Barisic certainly had the number of Forrest, even if his crossing was bizarrely abject. Kamara also had mixed fortune in this one, coming off second best a lot in many battles. Morelos really struggled against Ajer.

6: While Rangers mostly lost in the individual battles, as a team they did produce the better football – they seemed a little weak at times in the tackle compared to Celtic, and lacked some physical presence at times, but they overcame that with more of the ball especially in dangerous areas. It was just a pity that superiority couldn’t translate into goals.

7: Alfredo Morelos was too obsessed with trying to blast with power past Forster and didn’t think enough with his shooting. Forster made one top-drawer save, from Jack, but otherwise the saves he made we’d expect McGregor to as well. None of the shots otherwise, particularly from Morelos, really pushed him into a jaw-dropping save, and that was a bit concerning.

8: Rangers’ defence was mostly comically untested, but the two times it was pushed it was brutally undone. The first for the goal, and although it was offside, Helander and Goldson were still caught flatfooted. The second, thanks to Edouard’s holdup play, saw Mikey Johnston clean through. We should point out 10 men should NEVER be 3 men up in a counter over 11 men.

We didn’t expect a win in this one once we saw the team sheet. We’d advocated Katic and his physicality would have helped, while the loss of Davis was a blow too. But the team did play better than it was anticipated to. As for ‘should have won’? Only losers say that. We’ve said that countless times the past 7 years. Real Rangers teams win. Real champions win.

The sooner we learn how to win on the big domestic occasions, the better.