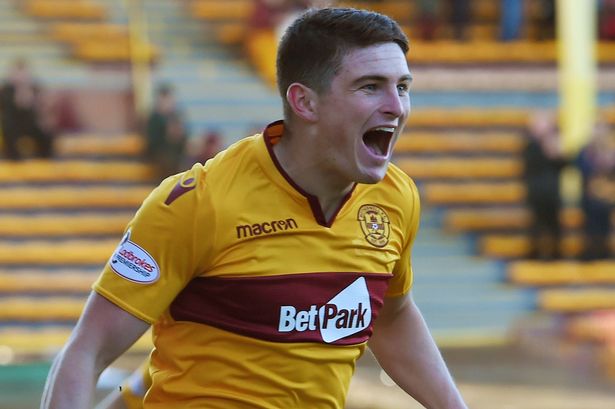 A number of keys aspects came out from yesterday’s win over Motherwell, yesterday’s comfortable win we hasten to add.

But one of the most intriguing going in was the potential performance of (former) summer signing target Jake Hastie.

The 20-year old winger was subject to Rangers interest for the past two or three weeks, but Steven Gerrard reportedly got tired of stalled negotiations and Rangers pulled out.

Whether that unsettled Hastie and played on his mind we couldn’t possibly say, but if this audition for a Rangers role was anything to go by, we dodged an absolute bullet.

Sure, his stats really are something – he’s arguably been Motherwell’s best player this season, and he only returned to Fir Park in January following loans out. But when it came to watching him in the flesh, he came up short.

Poor decision making, weak dribbling, a lanky and awkward glide about him, Hastie reminded us of a young Kyle Lafferty without the ability or physical strength.

His movement wasn’t great, and the few times he got the better of Jon Flanagan down the right he either chose the wrong option or let his team mate down with a bad pass.

When Rangers play against signing targets, their performances are huge – can they handle the pressure of playing amidst a Rangers atmosphere, be it at Ibrox or their own patch? Think of how poorly Jamie Walker did at Ibrox last season when the speculation was at fever pitch. Think by contrast of how well Jordan Jones has done.

It takes a strong will and a powerful mental strength to cope with the weight and expectation of being a Ranger, and if yesterday’s display against us was anything to go by, Hastie is no better than anything we already have.

Indeed, someone else in Motherwell’s colours stood out far more and we’ll have an entry on him later today.

But going by this showing, there are better players for Rangers to build around than Jake Hastie. We’d already take one of our own in Glenn Middeton every day of the week.