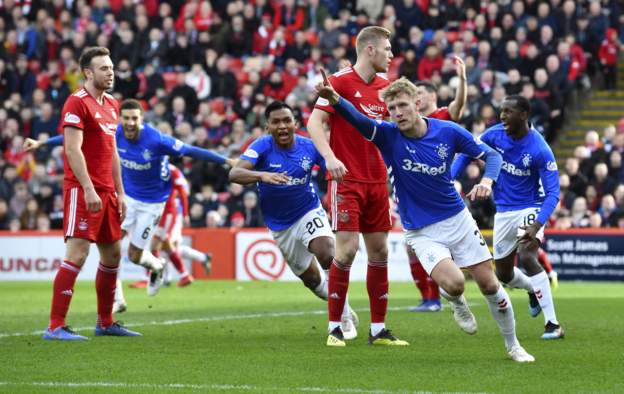 The dust settles on another frantic 90 minutes between Rangers and Aberdeen, and following the 1-1 at Pittodrie we’ll do it all over again later this month at Ibrox.

Ibrox Noise takes you through our ratings for the XI men out there.

Two or three big saves in this one stopped sure goals, and while it wasn’t ‘flashy’ goalkeeping from the number one, it was critical. Big performance. 8

Really is in a bit of a lull right now. The free-flowing runs down the right don’t seem as frequent, and his defending is a bit hit and miss. Did manage a few crosses though. He’s ok, but he’s been much better. 6

Tough one for the ex-Brighton man. Careless penalty early on and struggled to get into the match. Did manage some big blocks and clearances as the second half progressed though, so far from a total failure. 6

Always seems to show up on these big occasions. Not only his critical goal, but a succession of blocks, tackles and clearances – really great display from the on loan man. 8

(we had to add this guy in at the end of the article because his impact was so negligible we forgot he was playing.) 4

Tidy enough in the first half again, we suppose, but just lacks the physical presence Ross McCrorie provides. He keeps it ticking and he does work hard, but his diminutive stature works against him a little. 6

First weak performance from Jack in a long time, the ex-Dons captain was absolutely hopeless in this one with repeated losses of concession and lack of concentration. Was a little improved in that second half, but definitely one to keep out the scrapbook. 4

Injury may have told on Arfield who was subdued and a lot less influential than usual. Does it emphasise any more his importance that if he’s not at his best, Rangers essentially don’t play, especially in midfield? 5

Strangled of possession for a long time before the match stretched out, McInnes made sure Dominic Ball choked the on-loan Liverpool man, and we’d have to say Ball just about won their battle. Still had quite a few moments of danger but like the win over Dundee, not as effective as he’s been in the past. Definitely lacks any understanding also with Barisic – that combination isn’t working yet. 6

Outstanding from Candeias who had some moments of absolute class and worked like the usual dog he is. That pass for Kent in the second half was sublime, and he was a constant threat. 9

Sadly it was the Mr Hyde performance from Morelos today – eager to get wound up, the early dive and booking subdued him and he was a pale shadow of the player he can be when he’s in the zone. Wasn’t today. 5

We’re a little surprised he made no subs, and that he selected Barisic over Halliday for an obvious physical battle, but mostly the team he put out there was the one that’s been doing the business recently. And until Worrall scored, it struggled badly with Aberdeen’s physical presence and McInnes’ man-marking tactics, particularly on Kent. But the second half did see improvement, so his half time chat had something of an effect. But sadly that Joe Lewis had essentially no saves to make did point to a combination of some admittedly decent defending by Considine and McKenna, but also a lack of guile up front. Something Gerrard just couldn’t fix. Tough day. 5