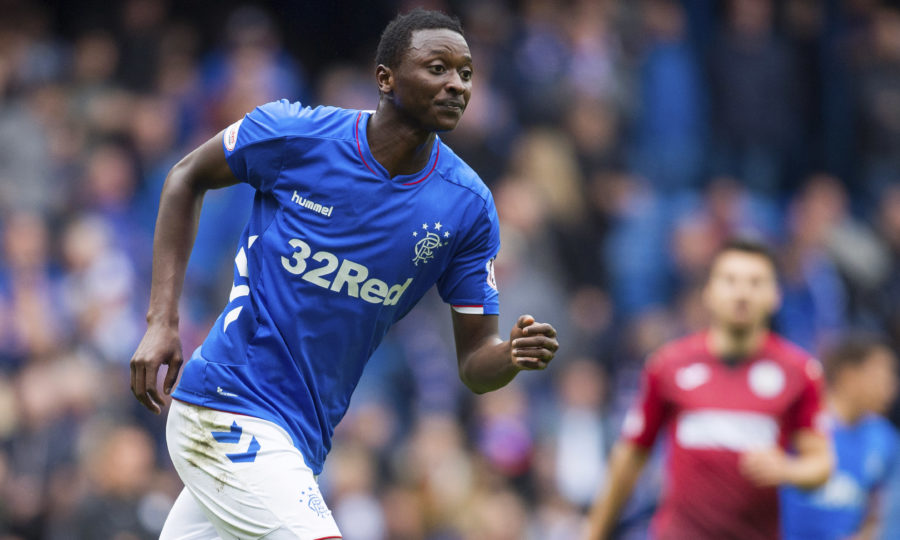 If one player’s selection was a shock yesterday, it was the introduction to the starting XI of Umar Sadiq.

We had a small suspicion at Ibrox Noise that he would take his maiden bow at Hampden but didn’t follow up on it, plus we know the comments would have been filled with outrage at such a preposterous idea.

Which, in many ways it was; Sadiq has been a laughing stock since his arrival, unable to coherently perform and looking at best gangly and at worst utterly awkward.

But he was the only striker at Steven Gerrard’s disposal yesterday so it was either deploy a different position as the number 9, regret the lack of Jason Cummings, or change the formation.

Truth is, none of these were valid ideas, and the solution Gerrard had was his effective hands tied outcome.

And you know what – apart from the naïve offsides (just like Morelos has done a lot of the season) and the blood to the head moment of the dive, he actually played pretty well.

He played no worse overall than we’ve seen from Lafferty and Morelos at times this season, managing to hold the ball up several times, take some good touches, and be a nuisance in the Aberdeen box.

But sadly due to his dive the rest has been forgotten, and it must also be borne in mind Sadiq is not exactly an elegant customer and gravity is not as kind to him as it is to others so we’re even willing to give him a certain benefit of the doubt that his tumble wasn’t a wilful attempt at cheating.

After all, clean through on goal and we can’t fathom what any player would gain from diving when they have the clear advantage.

But the reaction to this match has been to scapegoat the Nigerian. Which is disappointing, as he was definitely by far not one of Rangers’ worst performers.

We’ve seen similar outrage over Morelos’ red-mist moments too, and some are even blaming the Colombian for the result given his indiscipline led to his being banned from this match – that’s a little far for us.

But yesterday’s loss had nothing to do with Umar Sadiq. Plenty of Rangers shirts had far worse displays than he, and overall it was another systemic failure at this level by all concerned.