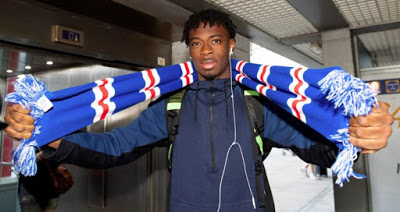 Last night’s heroics against Rapid Vienna in a match where expectations had been modest have left Rangers fans in a much better place than 3pm on Sunday.

Following that atrocity in Livingston, the side produced, as Steven Gerrard almost rightly said, their finest 90 under him. We’d give honourable mentions to the win in Croatia and the draw in Russia, but this is splitting hairs.

Regardless, there is a lot to chew through, but one curate’s egg is definitely simmering in the form of the frequently-present Ovie Ejaria, and there is little doubt this player, despite his regular starts under Gerrard, is nowhere near a fan-favourite.

Why is this? Why is a promising young creative midfielder simply not popular with the fans? It’s certainly not the Josh Windass syndrome of attacking them on social media or frankly disgracing himself and the club with certain antics. No, it has to be something else.

True, his interviews have been pretty horrific – answers which frequently appear shorter than the questions and a truly questionable enthusiasm level during said media performances unlike the clear joy someone like Lassana Coulibaly had when arriving in Govan probably didn’t endear him.

But that, while slightly regrettable, is usually forgotten when the player delivers on the pitch. And this is where our problems probably start with the playmaker.

It’s not like Ovie Ejaria has been awful – he hasn’t. But there’s usually a balance between ‘deserve’ and apparent ‘divine right’ when it comes to playing and Ejaria has rarely appeared to earn his place, often starting regardless of how he is playing. Some argue about a loans’ clause where he, Ryan Kent and others have a contractual stipulation to game time, and it’s regardless of earning their place. We can’t confirm or deny the existence of this. But it’s not the only issue.

The really important stuff – what he actually does on the pitch. We’ve seen him scoring just two goals and making absolutely no assists at all. For a creative midfielder, without being too harsh, this is utterly pathetic. Especially one who’s made 13 starts and 4 sub appearances.

However, he has shown a lot of technical quality, composure on the ball and generally decent use of it when in congested midfield. The problem with Ovie Ejaria is there is no quality when it comes to advanced midfield. He mostly takes the wrong option, either holding onto the ball way too long before losing it, or passing to the wrong man, often having it intercepted.

We also noted last night, for the first time, the guy has absolutely no pace, and we had to agree with observations of laziness when it came to getting caught offside with astonishing naivety.

This isn’t a 17-year old kid, folks. He’s two years Glenn Middleton’s senior and if he’s to develop as an AM he needs to learn and quickly.

The problem we really have more than anything is we feel we quite simply have better options than Ejaria. We have a glut of midfielders, fit or unfit – Coulibaly, Arfield, Halliday, Jack, Rossiter, Dorrans, McCrorie you name it – and we honestly can’t justify Ejaria starting ahead of a single one of those if all fit.

And yet the lad still seems to start most matches. In fact, knee injury aside which forced him out of the Villarreal match and Dundee match respectively, Ovie Ejaria has featured in every single Rangers match as a starter or sub this season.

We can’t help but feel that while he by no means disgraces himself out there, he just doesn’t cut it.

We ran a poll some weeks ago and most responses rejected him as a starter. Unfortunately, we suspect that choice isn’t entirely in Gerrard’s hands.