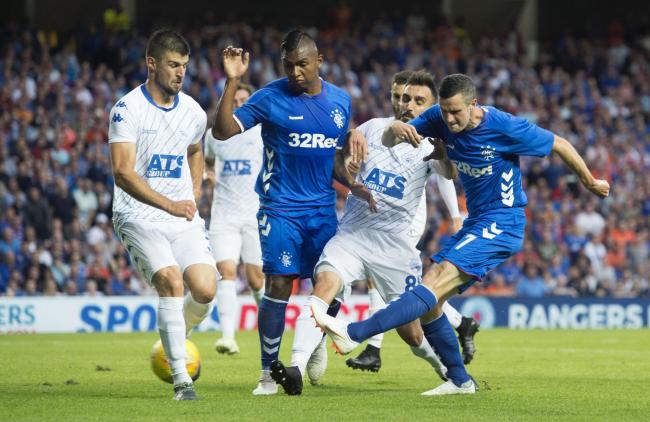 Something a little different for you today; Ibrox Noise, Richard and Greg have teamed up to give you three different XIs for tonight’s crucial second leg and why. Whose do you prefer?

Richard thinks that one of the most important games in Stevie G’s short managerial life has come upon him far too quickly. He has hardly had enough time to get even a fraction of all his wonderful ideas together with his new players. If we get knocked out of the competition as early as last year, it would be an unmitigated financial disaster for such a massive club to fall again at the first hurdle.

He is working so hard with the squad and I am positive that it will all be worthwhile in the end.
My main worry is the poor timing of this critical qualifying round of the Europa Cup. It takes time with so many new players trying to fully gel together as a team, all at once.

Stevie knows he needs more time to practice his ideas with the lads, and to polish their individual talents into real teamwork. He still hasn’t worked out every player’s best position, but that will come and will benefit the players and Rangers.

With a very hard fought 2-0 win at Ibrox already in the bag, how does Gerrard and his talented background staff deal with this 2nd leg in Macedonia against FK Shkupi. He could decide to play the away game in a different style to how he set his team out to play at home in the 1st leg.

I am only a Rangers football writer with a lot of different opinions to other Light Blues fans, for what it is worth – here is my team in a 3-5-1-1 formation and I wish Gerrard the best of luck for this momentous game.

With Tavernier and Murphy playing as wing-backs, the back 3 becomes a 5 in seconds when Shkupi have the ball. As soon as we retrieve the ball, the 2 wing-backs start the quick attacks on the breaks.

We need solidity in the middle and back to avoid being caught out, while I’d ditch the captain to prove he’s entirely dispensable. Greg Docherty and Ryan Jack combine in the middle – I reckon they’d work well together and compliment each other.

I’d also select Josh Windass up front because frankly the guy is a striker, a goalscorer, and it’s his best position – and he’s not wasteful Morelos.

As for Ibrox Noise?

It is vital to shore up the space between defence and midfield. Shkupi got far too much joy and McCrorie had frankly a weak game – either the youngster needs assistance or he’s out of form, but far too much went through him and I’d rest him – he may also still be carrying that foot injury. I also think Greg’s onto something with Windass to an extent – I’d play him as a free-roaming 9 and 10 in one – he’s a natural goalscorer and is rarely credited for his timing in the box – plus he’s a deeper attacker too with those late bursts too, and I’d partner him with the outstanding Ejaria.

As for formation? 4-1-4-1 is not working – it’s plain to see this formation is not playing to many of the players’ strengths. McCrorie and Candeias have really struggled the past two matches in their new positions, and Windass is utterly isolated on the right.

Good old fashioned 4-4-2 with a hint of experiment…

So, whose lineup do you readers prefer?