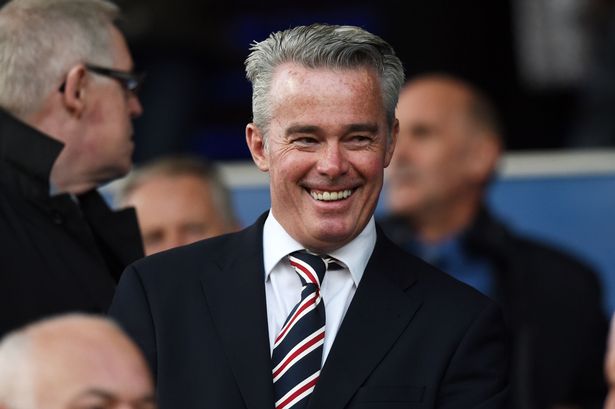 In yet another eventful twist, 24 hours later following Graeme Murty’s sacking/resignation (whoever you feel like believing), directors Paul Murray and Barry Scott have followed likewise out the exit door.

For his part, Scott was only at Ibrox for a matter of months, having been appointed last December, but Paul Murray was one of the faces of ‘viva la revolution’ with his place on the board elected in 2015 alongside that of Dave King and John Gilligan.

Murray’s legacy is patchy at best and poor at worst. He was a stabilising hand, arguably, during the regime change of three years ago and was Rangers’ public face for the following months after that EGM, but as time went on Murray disappeared entirely from the front line.

Furthermore he will be ‘best’ remembered for two big decisions which history will likely judge him on.

Firstly Mark Warburton was his appointment. Chairman Dave King obviously gave it his approval but it was Paul Murray who led the selection committee – and while Warburton managed to get Rangers out from the Championship, it was an ultimately poor and short-sighted appointment, as borne out by the Englishman’s failure in the SPL, at Forest and now his unemployment.

The second thing we will all remember was that one of Murray’s first acts was to lavish praise on a certain Scottish red top, by calling it ‘courageous journalism’.

A number of fans, including yours truly, were absolutely appalled by this and it certainly backfired given all the negative press said red top continued to spew out.

Beyond this, we’re not really sure what he actually did behind the scenes.

We long-advocated a new board – well, King aside, the board now is a different one entirely to the one the fans voted in. With Douglas Park and his son, James Blair, King himself and Alastair Johnston among others, it is not the same group of men who wrested control from Llambias and co.

But it does make the same mistakes.

It really is all change at Ibrox.