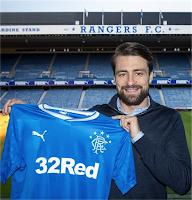 Martin Wants to Follow in Weir’s Footsteps
The
new kid on the Rangers block, Russell Martin, is keen to follow David Weir’s
footsteps as he aims for glory in his loan spell at the Ibrox stadium.
Martin Won’t Rule Out Being With the Rangers for the
Long Haul
Martin
is adamant that he will not rule out remaining at the Rangers for the long haul
after he managed to clinch a deal at Ibrox until this season draws to a close.
Of course, David Weir was in what was thought to be the twilight of his
football career when he was signed as a stop-gap centre-back, short-term, for Rangers. And the veteran defender ended up staying on for a total of five
seasons, and won eight major honours while he was there as well.
Martin Has Arrived in Glasgow
Martin
landed in Glasgow on Tuesday – 11 years to the day since Weir got recruited by
Walter Smith, from the Everton Football Club. Martin is five years younger than
Weir was when he got signed, and has displayed the leadership qualities Graeme
Murty, the Gers boss, wants as he look around in the hopes of adding certain
characters to the squad.
The
32-year old player, who has been capped a total of 29 times for Scotland,
became the fifth signing in an industrious transfer window for the Rangers, and
could well be making his debut at the Scottish Cup trip to Fraserburgh.
Martin’s Excitement Was Obvious
Martin
was unable to hide his excitement as he landed in Glasgow on a morning flight
from London. As he made his way to Rangers’ Auchenhowie training complex,
the stopper indicated his giant suitcase and quipped that he had no intention
of failing his medical! And, if things go according to play, then he could well
be staying for much longer than his initial spell- that is, of course, if
Weir’s experience is anything to go by.
Martin
stated that he was a Norwich City player on loan, but that he had spoken to
someone who told him about Weir signing for the Rangers at 37-year old and
eventually staying with the team for five years. He added that no one knew what
would happen, but that he was focusing on the next three to four months, giving
his all to the club, and enjoying every minute.
Martin
added that he was excited, and that what would happen eventually remains to be seen.
He ended off by saying that he hoped the next few months would go well for both
himself and the club, and that the matter would need to be taken from there.
Playing
for these prestigious teams is a feather in any player’s cap, and with football
being as popular as the Star Wars franchise, and the world’s biggest spectator sport, it is easy to see why they
are so keen to be signed.
Martin Desperate for a Spot at the Rangers
Martin
has been at Carrow Road for almost ten years, and got handed a deal extending
over two years in the summer. But he has been out of the picture at the
Canaries, and was thus very eager to sign up for Rangers when he heard that
they had expressed an interest. And his ex-Norwich City team mate Graham Dorrans, who is now at Ibrox,
supported him and told him to seize his chance.