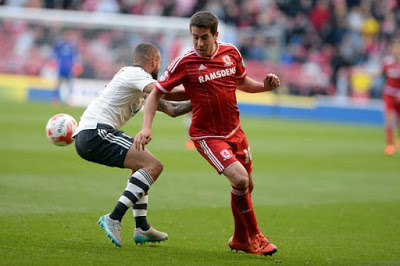 As Rangers fans know only too well, while yesterday’s performance and result was promising, the left wing issue still remains a prominent problem.

Pedro Caixinha has four options for that flank, none of which are outright answers. Declan John was conspicuous by his complete absence from the match day squad after two days earlier stating he would get minutes at the weekend, while Niko Kranjcar’s form continues to be an issue of contention.

As such, should Pedro make a move for a player he may be familiar with, in more ways than one?

Carlos de Pena, a 25-year old Uruguayan left winger is currently a free agent but did spend some time at Caixinha’s old haunt in Nacional.

Like his former team mate and now current Rangers star Daniel Candeias, he managed quite a few appearances for the Bolso, amassing well over 50, but his career has, again similar to the Portuguese, stalled a little.

Beyond the novelty of his name, Pena could be a shrewd acquisition for a very modest outlay, and provide a proper and dedicated option for the left wing rather than the patchwork options Caixinha currently has at his disposal.

Pena’s spell at Middlesbrough was roundly criticised and the young winger was said to have failed to adapt to the pace of the English game, but few point out the fact that immediately before he signed he and his mother were involved in a car crash which would have seriously affected his mood and life prior to such a big change.

Rangers have given Candeias a new lease of life, while Morelos bangs them in and Alves and Cardoso look the part.

With a low risk fact and low wages, would Carlos De Pena be a worthwhile addition?

NB: Thanks to Calum Morrison who has pointed out an error on our part – the Nacional de Pena played for was the one from his homeland, not Portugal’s. Nevertheless, this does not reduce the potential for his signature.