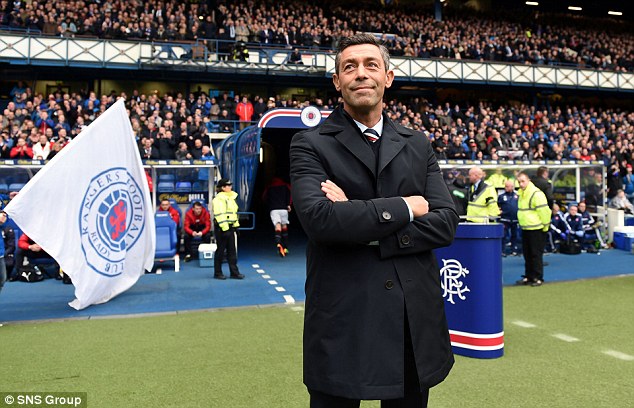 It must have been music to Pedro Caixinha’s ears as he strode out of the Ibrox tunnel, in his first Ibrox appearance as our new Rangers manager. It was a special moment for him as all the Teddy Bears cheered him long and loud.

Special! He might become the Special One for us. See what I did there?

Ped the Ted marched out of his technical area and soaked up the acclaim of the packed crowd – what a fantastic memory for everyone who witnessed the scene.

Rangers started the game well and the crowd were right behind them from the start, especially coming on top of the good showing last week against Celtic and having Ped in the dugout to ring the changes for any weak performances. The play was slick and quick and there was a lot more urgency about all of the players, but then again, you would expect that from a Rangers team fighting for their places with a new manager making his own judgements.

The goals came from Hyndman and Hill who scored before half-time and a Waghorn penalty and an expertly-worked goal from Wallace in the 74th minute added even more shine to a very easy first Rangers win for Ped the Ted.

Martin Canning’s Hamilton played most of the match without a recognised striker. This played into Rangers’ hands as they eased their way to another routine Ibrox victory over the Lanarkshire club playing without confidence. Their plan was to be very defensive, deny us space to play our normal attacking game and for them to prevent us scoring. Canning’s plan A failed miserably – just like Warburton’s plan A usually did with us.

I knew Ped would go with roughly the same team as Graeme Murty picked for the Celtic game and Lee Hodson was the odd man out – again! It was nothing personal as Ped obviously wanted to pick a slightly more attacking side. Let’s be honest, Lee was brought in to contain Scott Sinclair, who is one of Celtic’s best players and he did his job brilliantly – thank you Lee!

Jon Toral recovered from the injury that kept him out of the Rangers side last week and was the one change to the line-up for Ped’s first match in charge. He also moved Tavernier back to his error laden position of right back. As it happened, he created havoc down the right flank, but be warned – this was against a non-attacking dispirited Hamilton team.

Another major difference with this new Rangers set-up is the way the team were prepared properly from the start of the game by using a vigorous drill routine with new fitness coach Pedro Malta. This was followed by Helder Baptista’s new ball workout routine and all of it was conducted at a really good pace – brilliant preparation and long may the changes keep coming for the good of the individual players and to get the best out of the overall team.

Graeme Murty was observing both routines and it is obviously going to be used with the younger players from now on. Will Graeme revert to his role as under-20s coach, or will he be kept around the first team by Pedro for the sake of continuity, following his successful caretaker stint?

Before kick-off, the Broomloan Stand raised a banner in Murty’s honour to thank him for being a successful caretaker manager and he was pleased to salute the fans before taking his seat in the first team dug-out. Another excellent decision from Ped the Ted. Please keep your great ideas coming – I like you already.

It was a nice way to thank him for his services, especially as it came about due to the fiasco of Warburton, Weir and McParland, all waiting to accept the Nottingham Forest offer which was vehemently denied by all three of them. To think they wanted compensation from the light blues – reprehensible conduct!

After the captains shook hands, it was Pedro’s turn to take another bow and he really seemed to enjoy the added adulation from the home crowd.

Ped chose to bin the easy Warburton way to play 4 3 3, to play a fluid 4 – 2 – 3 – 1 line-up with Waghorn at centre forward with Miller, McKay, Holt, Hyndman, Tavernier and Wallace getting forward at every opportunity. In fairness, it worked a complete treat in this game.

Miller whipped a first-time pass to Barrie McKay whose cut-back deserved a much better finish than the shot which Holt hurriedly swept over the bar, but the goal came from a great move down the right with MOTM Tavernier in a quick one-two with Miller giving him the opening to direct a low cross for Hyndman to score with a neat low finish past Gary Woods.

Hill, who scored the equaliser at Celtic Park, notched another one from a similar position to put this game to bed. He started his three-game scoring run with a goal against the Accies in the cup game and added another on Saturday, as he got on the end of an accurate Toral free-kick at the back post to side-foot home. Ped has already stated that dead-ball situations are very important ways of scoring important goals and that Hill is particularly good at attacking the ball.

Rangers went further ahead with a stonewall penalty given by Don Robertson as Donati clipped Waghorn in the box. His well-taken kick helps his goals for total this season.

Rangers could now afford to make some changes and brought on Joe Garner for young McKay in the 66th minute. 10 minutes later Dodoo was introduced for the last 15 minutes in place of Waghorn and Forrester for Miller with only 7 minutes left to play.

Garner couldn’t find the net but there was a deserved goal for skipper Lee Wallace who capitalised on some excellent interplay between Miller and Waghorn to achieve an impressive finish beyond keeper Woods from a difficult angle.

Ped the Ted had a good win to kick-start his Rangers career, but harder battles lie ahead.