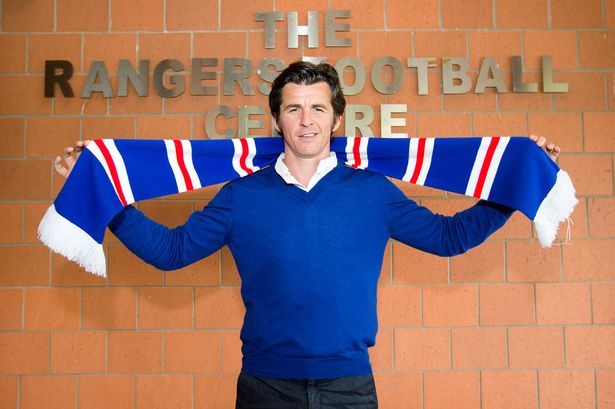 As a young lad from Huyton, Liverpool, Joey Barton played for both Everton & Liverpool as a youth player.

When discussing Rangers’ latest signing, Barton has more baggage than the average bag carousel at Glasgow Airport. He is undisputedly known for his off-field ill-discipline, and Joey once stubbed out a cigar in a youth player’s eye at Manchester City. He also spent time in prison for assault and affray in Liverpool in 2007.

On the football pitch he often dives into dodgy-hot-headed tackles a bit like Fernando Ricksen used to do when at Rangers some years ago. Ricksen came to mind when the news broke that Rangers were trying to sign Barton on a free transfer. In fairness to Fernando, he was a definite hit with the fans and we all wish him well with his current illness.

I trust Mark Warburton explicitly, especially when every player signed at Ibrox also requires the opinion and agreement of his assistant David Weir and the wily fox, Frank McParland, who seems to be doing a fabulous job with all the information and knowledge he holds of the English league players available for free transfers or for very little fees required. If they all agree that Joey Barton is worth taking a gamble with at almost 34 years old, who am I to argue? What I do want to say is – he can certainly play, as he has loads of ability and he is a winner. His CV is fab!

In season 2006-07, in what turned out to be his last year for Manchester City, he played in 39 matches, and scored 7 goals in a hugely successful period for him, apart from the fact that he accumulated 11 bookings plus a red card, for his petulant and over robust tackling. He became an easy target for the referees in the Premiership.

2007-08 on the 14th of June 2007, Newcastle United signed 26-year-old Joey Barton from Manchester City for a fee of £5.8m and played in 23 games in his first season for the Magpies and only picked up 4 bookings for the whole season. Joey loved playing at St James’ Park with its fabulous atmosphere and a fervent group of fans, who know how to get behind their team. Just like he will find it at Ibrox, but with an even better and louder group of supporters.

2008-09 was a bad season for Joey with injuries when he received a medial ligament injury in Nov ‘08, and when he returned after months out, he only managed to play another 2 games in Jan ’09, before again breaking his metatarsal, during a 2–1 defeat to his old club Manchester City. It led to only 9 games, 1 goal, 2 yellows & 1 red card for Newcastle United. A season to forget!

2010-11 played 39 games for Newcastle and scored 5 goals, but another 9 yellows. On 10 Nov ‘10, Joey again acted violently, this time against Blackburn, and was not punished during the game as the officials did not see the incident, but after reviewing the evidence, the FA again charged Joey with violent conduct. He apologized, accepted the charge, and was banned for three matches, Barton courted controversy once again on 11 Dec ‘10, when he appeared to direct homophobic remarks and a lewd gesture to Torres of Liverpool.

2011-12 played in the first 2 games of the season for Newcastle and picked up 2 bookings and on 25 May ‘11, Barton’s agent Willie McKay confirmed that his client could leave for a free transfer to Queens Park Rangers where he featured in 34 of their games and he scored 3 goals with 8 yellows and 2 red cards, for another turbulent year with the referees.

2012-13 in the extremely competitive English Championship, Joey managed to accumulate 13 yellows + 1 red card for Queens Park Rangers in appearing in 39 matches. He did play well for them throughout the season and scored 3 goals.
2014-15 in the Premier League with Queens Park Rangers, he managed 28 games and scored a goal. Joey was singled out by other Premier League players for rough treatment and Barton played right into their hands by retaliating to the point where he picked up 11 bookings and 1 red card in the year that his team got relegated.

2015-16, Joey played in 40 games for Burnley in the English Championship and scored 3 goals, but unfortunately the supposedly older and wiser cool head was not working in every game, as he amassed a total of 10 bookings in the season.

There is no doubting Joey’s ability to hold down a Rangers first pick midfield position, as only this year he was Burnley’s Player of the Year in their title-winning return to the English Premiership next season. He also won an even better award, as Joey was named in the English Championship, Team of the Year, for season 2015-16, which is no easy team to gain entry into.

The biggest surprise is the fact that a player of his talent and experience was available to sign for any team he wished as a free agent. Joey is a figure of love or hate on the football field, with his notorious reputation as a tough guy and he does on occasion have a nasty streak about him; it seems to follow him around like a personal volcano – just before it finally erupts.

Sure, he is never far away from a hard tackle controversy, but that said, he is a successful footballer and a great motivator, and a good man to have in your team, especially if it’s going to be a hard fought match that needs to be won. The more players that can get stuck in, when the going gets tough the better, and his team mates always like him in the team, which is a great thing to have people say about you.

Joey always seems to deliver the goods for every team he plays for and he trains extremely well, with his fitness very good for a 33-year-old midfield player. He is a supremely confident, competitive character that Rangers supporters will love watching next season. They appreciate this type of player, as they loved Terry Hurlock, flying into tackles and taking no prisoners.

He will undoubtedly be targeted by opposing players and managers, by trying to get him booked and eventually sent off and the Scottish referees will be attracted to his tackling, like bees are to honey. I suspect a suspension or two to be on the cards next year. Hold on tight, as we supporters are in for a bumpy ride!