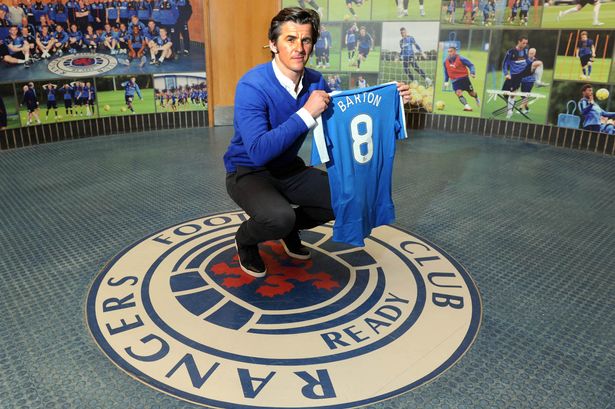 With the transfer window now officially open, despite the signings already made for Mark Warburton’s Rangers Revolution, there is clearly plenty scope for new additions to be made.

Over the past week we have seen Khalis Aucho, Kolo Toure, Fanendo Adi, Niko Kranjcar (appears to have said no) and Sone Aluko (signed yesterday for Birmingham) mentioned, along with the usual Danny Grahams, Grant Hanleys and others.

But of who has signed, what could a new look first XI under Warbs line up as?

Ibroxnoise.co.uk takes you on a little journey over one potential line up, based on definites, strongly possibles, and wild guesses. Let the games begin!

There is simply no reason Wes will not be first team #1 next season. While no Goram, Klos or even McGregor, he did well enough in the Championship to have earned his manager’s loyalty and he will be in place come the start of the season, despite the rumours about Southend United’s Daniel Bentley. If by January he seems out of his depth, the Magic Hat will surely look to make alterations.

He needs to work on his defending for sure, with some frankly diabolical displays at the back for the Ibrox men, but his attacking quality was an asset and his goals at times utterly stupendous. Tavernier, like Wes, has earned a right to have a go at the SPL. He is certain to remain first choice RB.

While this lad split the support down the middle, few would deny that at his best, he is excellent. With EPL, UCL, and previous SPL experience, Wilson is at a decent age to show an SPL Rangers how good a defender he is capable of being.

More popular than Wilson, Rob Kiernan arguably had a worse season than him, but was cut a great deal of slack through his obvious commitment and love of the club. He is likely to remain Wilson’s partner, unless a new experienced CH can be found at an acceptable price, but in the meantime there is a chance new signing Matt Crooks has been groomed to slot in this position due to his massive frame and flexibility to play there.

Nothing more needs to be said. Our captain will remain first choice LB for many years to come.

This is where the real changes start to kick in. Barton is the big signing, and the game-changer. He is not quite Xabi Alonso, sure, but he is an outstanding leader, playmaker and defensive midfielder all rolled into one. His experience here will help the back line and he will always start, injury and suspensions aside.

He and Barton make quite the pair – Rossiter has all the potential in the world and Barton is an excellent mentor for him – having made his mistakes, the ex-Man City star is in the best position to guide a protégé on the right path. No better teacher than someone who made the mistakes and learned from them.

This is where it starts getting difficult. There are five valid choices for this slot (Holt, Forrester, McKay, Halliday and Windass), but Holt’s outstanding season will surely have earned him a shot in the SPL for Rangers. Rangers are absolutely spoiled for choices when it comes to creativity, but the prediction is Holt will holt onto his place (see what I did there).

It is getting even tougher now to predict, so it is getting into the realm of guesswork, but after his immaculate breakthrough season and call up to Scotland, McKay surely has earned a first team slot next season. Up to him to prove he is worthy.

Got better, and better, and better last season as it wore in and by the end was completely indispensible. He is a wise head and led the whole team the further advanced the campaign went – he carried Rangers in many ways and even at his age will imagine he is first-choice striker.

This is the biggest guess of all! But why would the Magic Hat have been so desperate to secure Windass only to bench him? Midfield is utterly crowded and his dad has stated his strongest slot is the 3 in a 4-2-3-1 so one imagines he will be as part of the attacking prong up front.

I can already hear moans of disgust: where is Waghorn, why is Forrester not there, surely we would use our most expensive player O’Halloran, why is One of Our Own not in midfield etc etc.

The truth is the squad has already vastly improved – if you include the above, you have to remove others. Then there is outrage they have been dropped. Quite simply Warbs cannot please all the fans with the squad he has – everyone will have their favourites and any team anyone predicts will be met with howls of derision by some, apoplectic with rage their favourite is not there.

There are also the players we have not yet signed – the mystery CB we all expect to arrive at some point (Is that to be Eitan Tibi), and a striker that we desperately need in the view of many.

You are all free to angrily select your rebuttal line ups in the comments!