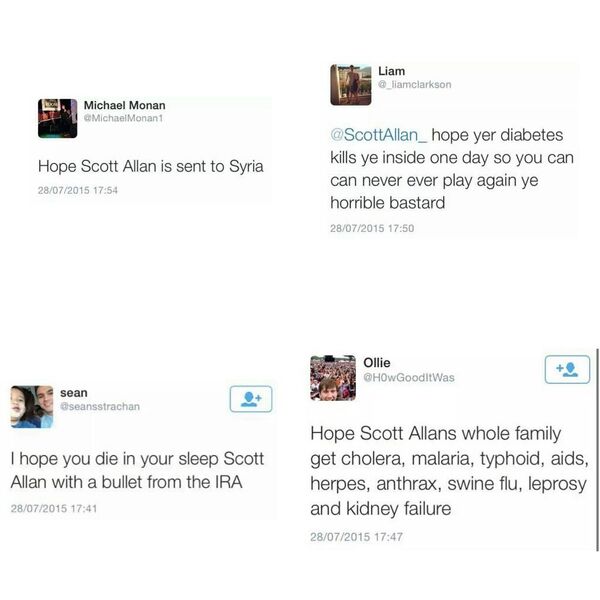 Scott Allan has received indirect
death threats only moments after his formal transfer request was made public.
The 23 year old midfielder made
official his desire to leave Hibernian for Rangers, something rebuked angrily
by the hierarchy at Easter Road:
“In the face of continued media
interest, Hibernian Football Club can confirm that Scott Allan has today handed
in a written transfer request. This comes on the back of two unwelcome and
uninvited approaches from Rangers FC regarding Scott, the first for £175,000
and the second for £225,000. Hibernian FC has refused both bids because the
Club has no wish to transfer a valuable player to strengthen a major rival in
the battle to win the Championship and gain promotion to the Premiership.
Hibernian’s position has not changed. The player will not be sold to
Rangers.”
However minutes later a glut of
death wishes, vile abuse and harmful tweets as shown in the title photo made
their way towards him, with Scottish football ‘supporters’ making clear their
feelings on his desire to join Rangers.
Even non-Hibs fans joined the
consensus supporting these disgraceful comments, and surely Police Scotland
will investigate.