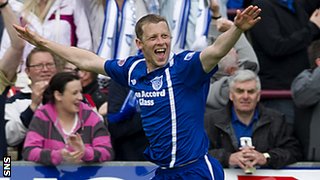 This coming Sunday Rangers host a
foe representative of some truly dark days in the Club’s history. After the
summer of hell that was 2012, Rangers began life in the-then Third Division
with a trip to Balmoor Stadium, an appalling match which only saw the 54-times
SPL champions scrape a point thanks to a late equaliser from Northern Ireland’s
Andrew Little.
Peterhead managed to effectively
slay the giant Rangers in what would become a symptomatic struggle epitomising
the disastrous Ally McCoist legacy.
Indeed, it was not till October
that year that Rangers even won away from home, with a 1-0 victory at Broadwood
Stadium finally ending the travelling drought.
Fast-forward three years and, if
you go back only a few months, you would argue not a lot truly changed. But at
the present day, in only just over a month since Mark Warburton became manager,
it is safe to say the visit of Peterhead in five days at Ibrox carries a
completely different complexion to the corresponding fixture 36 months ago.
That was obviously a league match
– this time it is League Cup, and the optimism around Rangers following
progress as witnessed in the Burnley friendly
then the utter tonking of Hibs on their patch could not be more night and day
compared with that clash in 2012.
Indeed, Peterhead are not the
only team to represent the dismal days Rangers fans went through, Brechin, with
all due respect to them, are where Rangers found themselves in the-then Ramsden’s
Cup first round prior to taking on Peterhead.
That was also a struggle, with
McCulloch scoring the winner; again, late on. In fact, in extra time. We know what has happened so far on Rangers’ travels this season in that tournament, compared with three years past.
So much has happened since then
which has not all been for the good, but in the past two months it feels like
the right direction has accelerated Rangers’ way and with Peterhead coming to
Ibrox, memories of the last time Rangers played them early in the season
certainly surface, but this time things feel just a little bit better.
Rangers are even signing proper
players now!