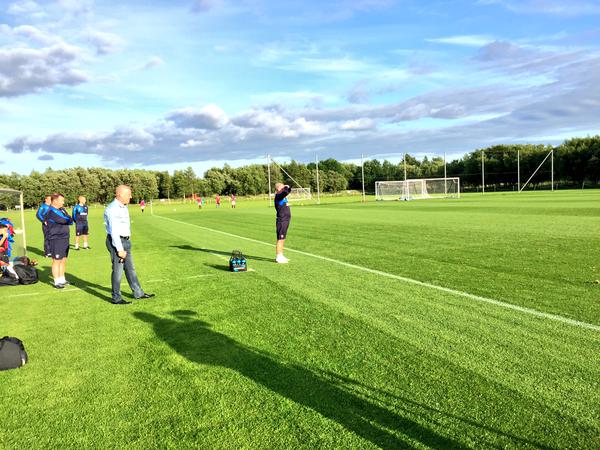 The photo at the top of this
piece is easily the most important evidence of the changes under Mark
Warburton.
The captured image, courtesy of
@RFC_youth, was taken at last night’s Rangers U20s v Tynecastle FC friendly at Murray Park.
The youthful home side trounced
their senior visitors by 6-0, but as welcome as that drubbing was, the most
important aspect of the evening was not the display, not the score, not even
the fact it was all achieved against a senior side by, essentially, a bunch of
kids.
No, the base argument resides in
the photo above; Rangers’ manager Mark Warburton’s presence at the match.
As regular readers will have seen
from some of today’s entries, the new boss is making widescale changes to the
way Rangers are run from a football perspective, both on and off the field, a
way of progressing the Club from the absolute hole it has been in for too long
under previous regimes.
And Warburton is putting his
money where his mouth is; showing up at Murray Park
to cast his keen eye over the youngsters. These are the future of the Club,
these are where, if youth schemes are to be taken seriously, tomorrow’s Barry
Fergusons and Alan Huttons are to be found.
It is where today’s Lewis Macleod
came from, with bitter irony that Warburton himself, then-manager of Brentford,
could see his potential and shelled out that near-£1M for him.
Whether we will see Lewis back at
Ibrox soon is a debate for another day, but the point holds true – Rangers cannot
spend £5M any more on a shiny new foreign star; we have to build our own now.
Rangers’ youth is doing its best
to help with that, and destroying a senior side 6-0 while your own Club’s
senior manager watches on justifies Warburton’s hands-on approach and serious
focus on the younger players.
As we know, at least four young
players have recently been officially affirmed in the seniors; Murdoch,
Sinnamon, Hardie and Walsh.
With the close attention the
manager is paying to that side of the Club, expect that number to rise.
If they are good enough, they are
old enough, and coupled with choice signings, there is every inch the ship that
sailed so dreadfully under Ally McCoist can be anchored back.
It is not too late for Rangers to
get the youth system right. And Warburton is proving that.