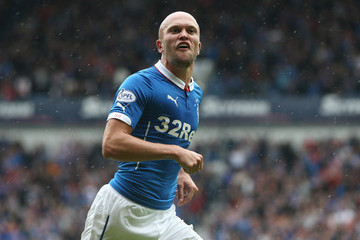 Nicky Law yesterday confirmed
Mark Warburton had had a heart to heart with him to persuade him to stay.
This was not exactly welcome news
in the eyes of many Rangers fans who feel painfully let down by Law; the former
Motherwell man was a lauded signing, who frankly failed to deliver.
His outstanding display v Hearts
in the 2-1 win aside, Law was absent presumed missing far too many times, not
just last season but since making the trip from Fir Park
in 2013.
But Warburton appears ready to
not only give Law another chance, but maintain him as an integral part of the
Rangers chain. Law said:
“It was good to come in after the
summer and I had a good meeting with the manager and we had a good chat. His
message was clear – to give him
everything I’ve got from day one and that is what I’ve been doing. I’ve
come in and done as much as I can and hopefully he has been impressed by me and
what he has seen so far.”
The biggest criticism of Law was
his tendency to hide, and not just in big matches. The man scored some great
goals, and deserves credit for that, but in terms of displays his anonymity was
conspicuous – consequently Warburton telling Law face to face what he demands
from him is hopefully the wake up call the Englishman needs.
Law went on:
“The manager had a one on one meeting with a
lot of the boys and I had one which was about five or 10 minutes long. It was
to introduce himself and speak about the things that he wanted from his players
and the things he expects.”
It appears Warburton has picked
out a huge number of the players and given them a mild hairdryer – this is
especially prominent for those who let the Club down so badly last season – Law
being one.
If the arrival of Warburton
finally sees the Motherwell Nicky Law Rangers signed emerge, then all the better.
Unfortunately, we said exactly the
same thing when Stuart McCall became manager and that did not work either.
It surely is the final chance for
him to prove he has what it takes. Evidence to this point suggests he does not.