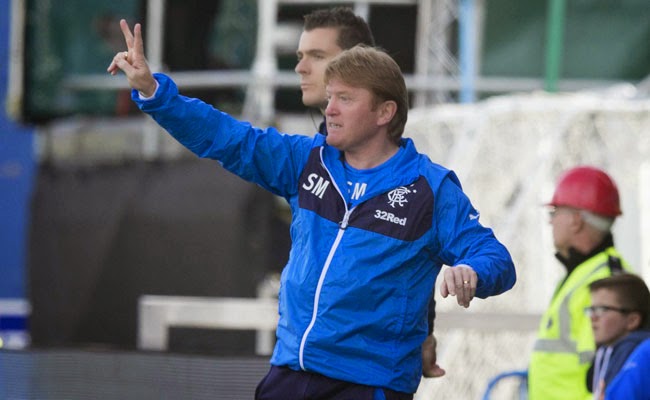 Rangers fans are relatively
divided on whether they want manager Stuart McCall to be offered the job on a
permanent basis.
While many give him credit for
the improvement since he took over, others feel it has not been sufficient and
feel Rangers would be better served with another appointment.
McCall, of course, is on a
short-term deal till this summer, and therefore like half the squad, is out of
contract himself and fighting for a longer-term contract.
However, with that rather
impressive win at Palmerston Park v previous bogey team Queen of the South,
McCall appeared to have done his own case a bit of credit, especially given he
corrected a number of the tactical mistakes from the previous visit to Dumfries
and produced a far more competent display.
However, yesterday news broke
that Rangers’ board has made an approach to MK Dons’ manager Karl Robinson who
has apparently rejected the overtures out of hand with sources suggesting it is
the right club but at the wrong time.
Now, by no means should any
Rangers fan complain at the club endeavouring to approach a progressive young
manager who has achieved a great deal in his short career to take the helm in
Govan, but the timing really does undermine the critical playoff campaign
hugely, and the credibility of McCall himself.
For Rangers’ board to make an
approach to another manager before the playoffs are complete, and send a
message to the current manager who wants the job permanently that he is 80%
certain not to be offered it, is yet another dreadful faux pas from a regime
who are starting to bumble from one incompetency to the other.
In the last three days we have
seen that embarrassment of a painting officially commissioned, deliberately hung,
and officially endorsed on the website and only the colossal rebuke from
supporters saw a u-turn and a rather stupid attempt at pretending it was down
to a ‘misunderstanding’. A three-stage misunderstanding it seems – impressive.
Now this. At a time Rangers
desperately need to prepare for the playoffs and play for the manager, and
themselves, to know that Rangers’ hierarchy probably does not fancy McCall in
the middle of the playoffs goes
something below poor.
It is Kenny McDowall all over
again, only this time instead of the manager not wanting to be here, and the
players not wanting to play for him, now the board does not want or support the manager and the players can
react one of two ways; fight even harder to show Rangers their support for
McCall, or lose faith and stop battling for a manager they believe will not be
here come this summer.
I know I will have the usual
suspects accusing me of ‘being someone else’, of ‘having an agenda’ and being ‘pro-Llambias
and Leach’; I have heard it on here a million times, knock yourselves out.
But the truth is the majority of
supporters expect good things from this regime, and are starting to voice
concerns about the lack of evidence this is being delivered.