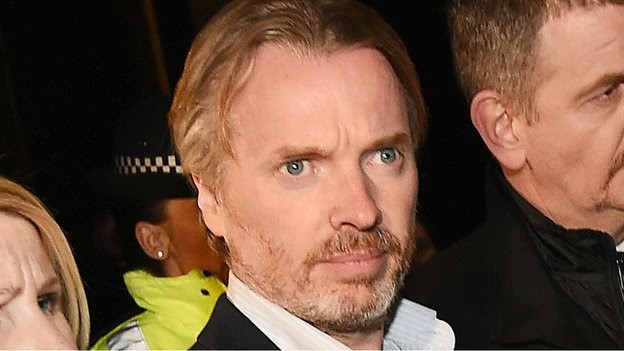 What another extraordinary and
dramatic seven days it has been for all those of an Ibrox persuasion. After
last week’s various off-field developments continued to simmer behind the
scenes, last Saturday saw a brief respite, as covered in my last entry, with a
trip to Tynecastle to face league leaders Hearts the upmost issue on Rangers’
agenda.
Yes, for once it was actually
about the football and not politics, and the defeat ensued almost all fans were
gunning for Ally McCoist. Indeed, rumours abounded that he was on the verge of
losing his job or resigning. This did not happen, of course, and indeed he
affirmed his borderline refusal to quit. When asked if it was on his mind, his
pointed reply was “…to leave here? No.”
The next maelstrom to tackle was
back to ‘politics’ though, and the apprehension, at last, of former owner Craig
Whyte in Mexico.
This long-awaited arrest saw an outpouring of baited anger and relief. Anger,
that it had taken almost three years to catch him, and relief, that it appeared
justice would finally be delivered to Rangers fans for the suffering of the
biggest corporate fraud in Scottish sporting history.
All the while Rangers’ quietly
released yearly accounts on Thursday which showed yet another predictable
shortfall of £8.3M, the reasons of which are plainly obvious and which I
covered in a previous entry here. Add to that the current boycotting of the
Club/team/football (attendances are currently dreadful) and income really is in
a quite desperate state. Only a return to the SPL and an upscaling of Club
operations thanks to raised revenue will see the situation begin to resolve.
But the cause of all this, Craig
Whyte, has finally been detained, and appeared in court relating to at least
two outstanding warrants. The fact that retention of Rangers’ players’ PAYE,
VAT & NI contributions is one of the two charges under the companies’ act
is mild justice that at last that he is finally being held to account for the
singlemost prevalent cause of Rangers’ plunge into administration.
His wilful hoarding of this cash
rather than forwarding it to HMRC is the single cause Rangers ended up in this
ghastly mess, and when Her Madge’s men caught wind of the millions he
collected, they demanded to force the Club into administration. Then Whyte got
Clark and Whitehouse and the rest is history. Thankfully they too are under
investigation (among others) and will equally face the consequences of their
actions.
Called-up witnesses to Whyte’s
fate include the man he ‘bought’ Rangers from, Sir David Murray, former CEO
Martin Bain who he fired, and Walter Smith, former manager under Whyte then
non-exec chairman post-Whyte at the Club.
The most intriguing plot twist
here is the possibility of Murray
in the witness box – he has claimed to be ‘hoodwinked’ by Whyte, but is that
completely true? A wily old fox like he seems far too smart to be tricked by a
conman like Whyte, and his evidence will surely shed light on exactly what he
knew.
Those, are events to come. What
is crucial for the absolute meantime are two things:
Firstly, that fans support their
Club. A consistent belief among many is the money invested in tickets or online
services or merchandise is ‘going straight into the board’s pockets’. First
off, most of the men in control at Ibrox are multimillionares (like Easdales)
or multibillionaires (like Ashley). The point is they do not need to siphon cash out of the Club for
their own back pocket. It is easy to believe they do, but the Easdales have put
at least £2M in, including the £500K non-interest loan. And other shareholders,
like our very own McCoist, chairman Somers, and various others have put in
many, many thousands.
The fact is Rangers’ income
simply is not big enough to allow these guys to ‘steal from the Club’ – as the
earlier blog I linked to points out, the Club’s income is critically low, so if
it is a cash cow for fat cats, it is a very, very skeletal cow indeed.
My point? Support the Club and
the team. Ok the football’s quality is not the best, and McCoist’s management
extremely poor overall, but our Club needs us to keep supporting it, not
protesting it. The only other financial support it will get is loans, and that
just increases debt. Do we really want that?
The second point is we have a
critical match against an SPL side coming up on Sunday in the Scottish Cup.
Arguing among ourselves will not help the players win the match, and whether
you support McCoist’s management or not, or the board or not, we are all
Rangers fans and want the best for the Club and team. And that includes beating
Kilmarnock.
It should be about the football
alone. It is not, but it should be. Let us try to focus on what truly matters
and be there for our Club.
WATP.