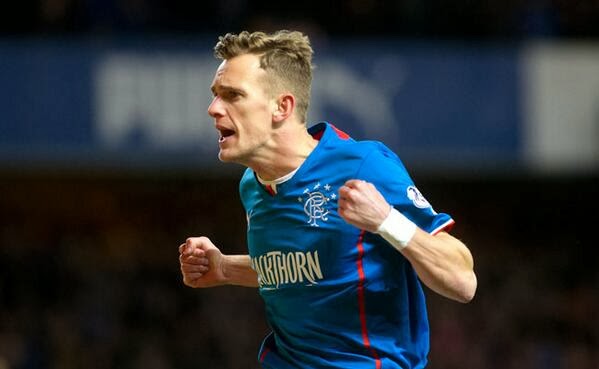 Among the glut of Rangers
signings in summer 2012 were two extremely high-profile SPL stars in Kilmarnock’s Dean Shiels and Hearts’ David Templeton.
Alongside the huge influx of other fellow top-flight players like Sandaza,
Kyle, and (then) Black, these players struggled to excel in Scotland’s bottom
tier as the Ibrox side failed to produce a significant enough number of decent
displays in the Third Division to warrant a lack of concern.
Yes, the side ran out comfortable
winners of the league in the end, but that it took till October 2012 before
Rangers managed to win on their travels in the league (a struggle in itself at
Broadwood) shows the quality of the displays was overly lacking as the Govan
side struggled to get to grips with the bottom tier of the (now) SPFL.
Shiels and Templeton were two of
the biggest names Rangers secured, Shiels a top-scorer for Killie and Templeton
a promising Gorgie winger who was heavily criticised for joining Rangers.
It is safe and fair to say these
two were among those who just did not consistently deliver last season, despite
some occasional glimpses of form.
Even this season, both suffered
the ignominy of being outright dropped as Ally McCoist reverted to a 4-1-3-2
formation using MacLeod, Law and Black with players like Aird, McKay and Smith
in-and-out of the team.
Shiels became a total outcast,
often failing even to register on the bench, while Templeton, suffering injury
and poor form, managed to get a seat there by name alone.
Shiels in particular became
desperate and his agent looked for a move away, with speculation that he was
being touted for a loan to various SPL clubs, while Templeton managed the
occasional cameo from the subs bench.
This all changed on January 11th
V East Fife, when Shiels was selected from the cold. Surely an advert in the
shop window, the player produced an excellent display and snatched both the
goals in a 2-0 win. In the following match at Station Park,
Templeton came on for Shiels, and
while Shiels this time produced a blank, his replacement did not and scored the
clinching second goal.
Since then, Shiels and Templeton
have started every match, and after Friday’s crushing of Dunfermline
in the last 16 of the Scottish Cup to the tune of 4-0 where, yes, Shiels got a
hat-trick and Templeton the other, the renaissance of both players has been
absolutely staggering.
From the cold and looking in,
suddenly both have become integral parts of this 2014 Rangers, with manager
McCoist adopting a slick 4-4-2 formation, seeing Aird on the right while
Templeton has absolutely dominated on the left.
Meanwhile Shiels is racking up
the goal count and showing every inch why he was a top scorer at Rugby Park.
Going by current form I am
absolutely delighted to be utterly wrong about both players, both of whom I
wrote off 100% only a few months ago, where now they may just give Ally a
selection headache when currently-injured Lewis MacLeod regains fitness.
The cup win over Dunfermline was as emphatic as it was dominant. A couple
of slightly nervy moments at the back, sure, but 4 goals and a flowing display
of creative football saw off the Pars with immaculate ease, and Templeton’s
marauding runs down the left decimated the Dunfermline rearguard while Shiels’
finishing was a mixture of clinical and feeding off scraps.
Right now it is not only hard to
see how MacLeod can get back in, but Nicky Clark too. Dropped to give Shiels a
chance, Dean has thoroughly taken it and when Clark
is fit again, if indeed he is not 100% now, it is difficult to see how anything
from midfield to attack can be changed right now.
McCoist has finally hit a winning
formula in conjunction with good football, and Shiels and Templeton are playing
a huge part in that.
Why fix something which ain’t
broke?