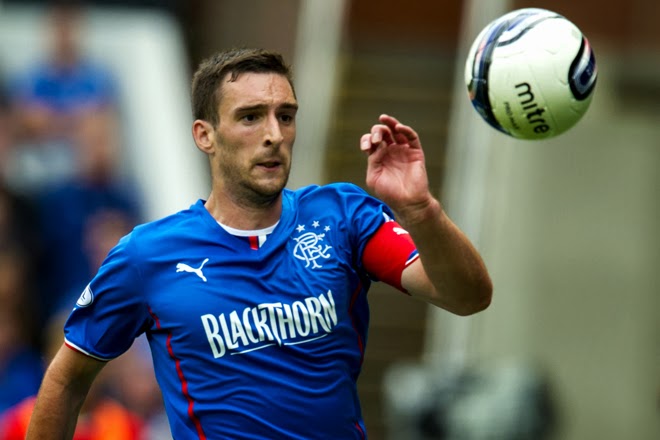 Over the past 18+ months, one
player at Ibrox has stood out more than any other. Indeed, his statement
confirming he was staying at Ibrox on the 26th of June 2012 was the epitome of
a loyal and classy player:
“When I arrived at Ibrox the support
from the club, players and fans was fantastic. The fans showed great faith in
us all during tough times and I still feel I have more to show them during the
remainder of my contract.”
Lee Wallace has shown Rangers
astounding loyalty and commitment. A Scotland
cap, he was the most prized asset to stay with Rangers following administration
that year, and many could argue he sacrificed his Scotland career for his club. Yes,
his partner was also expecting their first child, but Wallace still did not
leave a year later once the Third Division title was wrapped up.
However, two English sides have
been heavily linked with the cultured left back – Championship high-fliers Nottingham Forest,
and Premier League outfit Hull
City, also the employers
of two other former Rangers players; Allan McGregor and Sone Aluko.
This is now the January transfer
window, and Rangers’ financial affairs have been ridiculously well-documented;
the simple questions are these:
Wallace’s wages have not been
exactly broadcast, but it is logical to assume they are among the top 3 playing
staff earners. My understanding is captain Lee McCulloch’s salary is around
£300,000 a year, following various cuts, which breaks down to around £7,000 per
week. Presumably Wallace is similar and for a club in the financial pickle
Rangers are, a saving of £300,000 a year is worth its weight in gold.
Furthermore is the value of the
player. Despite what some SPL fans have suggested, Lee Wallace is worth around
£3M in terms of sheer ability and his performances for Scotland.
Indeed, STV’s comments on him agree with this assertion:
“What has never been in question is his
ability. Wallace is the most gifted natural left-back available to Scotland,
offering a potent attacking threat through his quick dribbling, and solid
defensive cover. His goal threat is an added bonus, and his seven caps show
he’s capable at international level.”
However, the problem is regardless
of the stature of the club, Rangers are in the third tier of Scottish football and
hold no aces when it comes to bartering with suitors. Due to the financial
frailty of the club, despite Wallace’s genuine value, it is unlikely to be the
received sum – £1,000,000 is far more likely – a bargain, unfortunately.
Rangers need the cash, it is as simple as that.
As for the team, can it afford to
lose Wallace? Well, bluntly put, ‘yes’ is the answer. McCoist almost certainly
anticipated this situation and signed Steven Smith for that purpose. Initially
perceived as a pointless signature, his acquisition seems all the wiser given
the player is more than adept at this level. Lee Wallace is twiddling his
thumbs playing against part-time carpenters and joiners. His class above them
is easy to observe. Smith is a significant downgrade but still more than
capable at this level.
And that is the reality Rangers
face.
On a personal level, I think
Wallace deserves the move away. He has given us almost two years of his best,
and has struggled to maintain a place for Scotland given Rangers’ current
league. While as fans we would love to keep him, is it fair on him that we clip
his wings and keep him selfishly in the nest for our own ends?
Wallace has given us a lot –
loyalty, consistent performances and not a word of complaint about the level we
play at. If a big move to a Championship or EPL side surfaces, and Rangers get
a decent fee for him, I think for his career and as our own thank you to him
for his outstanding service, we should let him go and watch him blossom.
Perhaps one day he will return
when the club is back where it belongs, but unlike so many others, Lee Wallace
did not do walking away.
Maybe it is now time we let him.