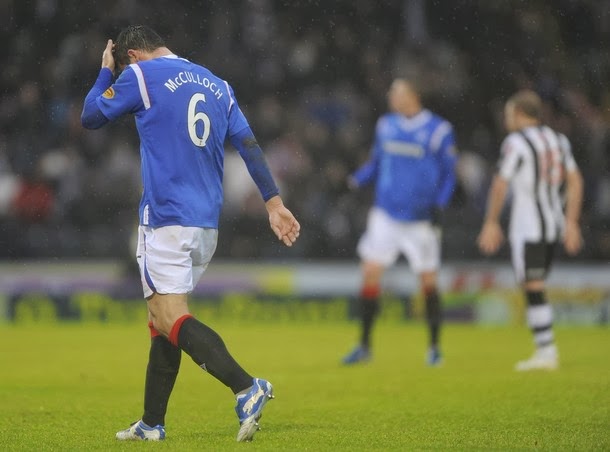 It has not been the easiest of build-ups to an Old Firm game for Rangers. After those imperious months of the early season where only 4 points had been dropped and no goals had been conceded away from home, the injury to key forward Steven Naismith was a catalyst to a sharp decline in the side’s fortunes.
As detailed in other blog entries, there have been other significant factors to explain such a drastic loss of form, including the loss of the entire left side of the team in Gregg Wylde, Sasa Papac and Lee Wallace, and an unsettled defence which lost Carlos Bocanegra for a period as well as the aforementioned problems which complicated left back.
All of this have led to a gargantuan swing in points, from 15 points ahead of arch rivals Celtic (who admittedly had games in hand) to the possibility that losing at Parkhead tonight will see the Ibrox men trail the Bhoys by 2 points. No one could ever have predicted such a vast change in fortunes.
The mood in the camp does not appear to be especially promising either, with suspended defender Dorin Goian suggesting the side is committing Hara-kiri and implying morale among players is particularly low. These are not really the messages fans would want to hear coming out of Ibrox on the eve of an Old Firm encounter which could well shape the rest of the season.
Manager Ally McCoist is saying more or less the right things in public, strongly assuring the club’s followers that the side will be ready for tonight’s clash, and that they will ‘be up for it’ big time. Privately though he must be utterly seething at the capitulation he has witnessed in the last 2 or 3 months, from comfortably leading the championship race to struggling to remain in first place. There can be no doubt he will have given the players every barrel he has, trying to motivate and inspire them, and leave them unmistaken that anything less than victory tonight simply is not good enough. While a draw is certainly not the worst result, any manager who expresses that message to the players is playing with fire.
That said, while the players must shoulder a huge amount of blame for the sub-standard displays recently produced, McCoist himself also must adopt responsibility for his own mistakes too. His job in light of the personnel problems recently suffered was to manage, to negotiate the hurdles presented and steer the side through the obstacles with only minor scratches, if any. Sadly, he has not managed this, with 2 defeats, and a number of draws cutting that supposedly unassailable lead down. His team selections have bordered on the completely absurd at times, with the truly baffling decision to play Papac in central midfield and the even more staggering one to bring Bartley on as a striker. Leaving the likes of Aluko on the bench when creativity is needed is further evidence that Ally may not be getting the most out of his team thanks to his own errors.
So we are left anticipating an Old Firm game when the players are generally in poor form, the manager is producing some questionable formations and selections, and the soundbites in the press are anything but inspiring. All this while Celtic quietly got on with cutting down the lead and, while admittedly no Barcelona themselves, still managed to produce the wins when needed.
There is no denying neither Old Firm side are currently impressive. Celtic are grinding out the results without playing especially well, while Rangers are in extremely bad form, and slipping up more than once. There is also the issue of Goian’s absence tonight, thanks to a second yellow at St Mirren Park, meaning either the sparsely-used Bartley will play, or aged veteran David Weir will return. McCulloch should play despite also being dismissed in Paisley but his contribution to the team these days is questionable. None of this really inspires confidence.
Tonight it is up to Ally to prove his doubters wrong, and to the players to show they can produce the sum of their parts, something they are some way off right now.
The championship depends on it.