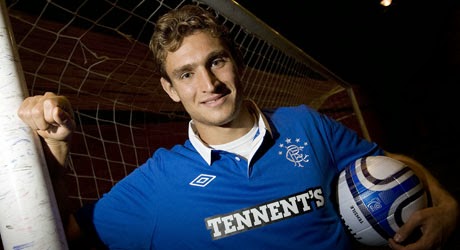 It was a protracted affair in the summer of 2010, when Rangers were linked heavily with Rapid Wien’s Nikica Jelavic. The saga ran on for months and included plenty of bartering over the price, when earlier offers of around £2M were rejected before the Ibrox outfit settled at a price of around £3.5M, which, given the financial plight of the club, was a massive outlay and the biggest fee paid for a player since the similar amount shelled out for Burnley’s Kyle Lafferty 2 years earlier.
Jelavic came with a pretty good CV, having been reasonable in the Austrian league with around a 1 in 3 scoring ratio from the age of around 23, plus heavily featuring for his national side, his caps today totalling 17 with 2 goals. Admittedly this is not the CV of Marco Van Basten, but his displays in the Europa League against Celtic especially brought him to the attention of Walter Smith and after much haggling over the fee, the Croat finally signed on the dotted line. In truth, bar these stats, not a huge amount was known about him, so there was a slight risk in this signing, but there is a risk with every signature. Another slight gamble was arguably his attitude; in order to force through this move, Jelavic refused to play for Wien against Villa in the Europa League. His club owner Rudolph Edlinger was not happy about this, and publicly castigated the Croat for this action
“For a player of this quality to leave the club through the back door without a dignified farewell is something I do not like. Coach Peter Pacult is just as concerned as I am. This is a slap in the face to thousands of fans.”
But the transfer, as mentioned, went through, and the bitter end to his time in Austria was soon forgotten.

The truth is Jelavic has been, if not an absolute revelation in Scotland, certainly a very solid performer, particularly in his first season. Despite a bad injury forcing him onto the sidelines for around 3 months, he still notched up a very respectable 16 goals, finishing 4th in the scorers’ table. He also scored the goal of the season with a stunning overhead strike at Pittodrie. However, he had never denied that his ultimate ambition was to test himself in the English top flight, and indeed before the final match of the 2010/2011 season, did claim that English giants Manchester Utd had shown interest in him:

“I know United are interested. My agent has established contact with them but that’s all I know. My agent has mentioned a figure of £13million and I came to Rangers for £4m so it would be a big gain for the club. However, I would only think of a transfer in the summer. I’m fine here and enjoying every moment.”
It was an ill-judged quote to make given its timing. It led to the summer transfer window of 2011 being a stressful time at Ibrox, especially when offers were indeed received for Jelavic, the most famous two being a rejected £6.5M from Championship side Leicester, which Jelavic later was quoted as saying was not the right move for him, and a £9M bid from an unnamed side who later emerged as Liverpool.
All this speculation last summer without any doubt affected his form going into the new season. He remains prolific in front of goal, but his setup, support, linkup and all round guile so prevalent last season in the last third of the pitch has been conspicuous by its absence this time around. He looks like a player who has enjoyed his time at Ibrox but hankers for a move on, and given his overall contribution, few fans would begrudge him achieving his dream and joining the English Premier League.
So here we are, the 2012 January transfer window, and it did not take long for clubs to be linked with the striker. So far West Brom, Liverpool, Sunderland, Aston Villa, and QPR from England’s top flight have all been speculated as holding interest. Liverpool are particularly intriguing given their previous supposed bid, and the fact that £35M signing Andy Carroll has failed to deliver up front, while more successful hitman Luis Suarez has been hit with a 2 month ban for racism. The Scousers need a top striker and quickly, and Jelavic could be a reasonably cost effective solution. Of course, Rangers will not let him go cheaply, and a price of £8M plus would probably persuade Craig Whyte to sell. Naturally, £8M to Liverpool is far less than it is to Rangers.
There has also been interest supposedly from Russia, and more recently, Spanish giants Atletico Madrid have expressed admiration for the front man. And of course Leicester remain in the background as potential suitors albeit it is unimaginable that the Championship would ever be a desired destination.
To add one last twist to the tale, manager Ally McCoist omitted him from the match squad against Motherwell, initially citing a problem with his knee. This then transformed to a groin problem. The last time a high profile player was omitted from a squad through a mysterious injury was Spaniard Carlos Cuellar, and days later he had departed for Martin O’Neill’s Aston Villa.
Jelavic has been a very good player for Rangers; not quite Prso, or Hateley, or other great legends to have plied their trade with the club, but a robust and reliable performer who bagged a fair number of goals in his time here. His time looks likely to be up now, and should he depart, it will be in reasonable spirit without a bitter aftertaste.
The big issue is how to replace him…